Over the past weekend I had the privilege of a three day weekend, so I took full advantage of it and headed out of town to Kenting. If your an ex-pat living in Taiwan and you don't already know of Kenting...where have you been? For those planing on living in Taiwan..put Kenting on your to do list. As a fellow Californian, it's a taste of home. 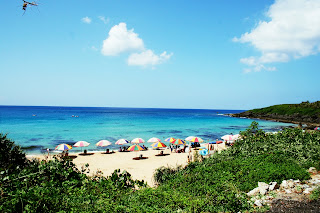 I'm talking about beaches, clubs, night markets, BBQ, water sports, awesome food and tons of other activities. Before going into detail about this list, let talk about getting to Kenting. Transportation unfortunately isn't as convenient, but still as convenient as Taiwan could make it. From any major city in Taiwan, you can take the High Speed Railway to Zuoying station aka Kaohsiung. From the Zuoying station, there is a express shuttle bus that departs every 30 minutes to Kenting. If I remember correctly, ticket prices were around $350 NT one-way and $650 round trip. It's an open ticket, so there's no assigned time. It's a 2.5 hour ride into Kenting. OK so now lets go down that list. Beaches. There's only a handful but they vary in size and quality and popularity. My favorites were Baishawan (白沙灣), xiaowan (小灣), dawan (大灣) and Jialeshui (佳樂水) which I didn't get a chance to visit. I heard Jialeshui is the one to go to for surfing. Xiaowan and Dawan however are easy ones to visit on since they are just off the Kenting road main strip. Baishawan is a higher quality whiter sand beach that is less crowded however is further west near Maopi and requires figuring out your own mode of transportation. If your looking for a hotel on the beach, the only one is The Chateau. It's right on Dawan, which is one of the longest beaches. However the sand is  a little dirty and the waters are littered with churned up seaweed bits. Adidtionally, If you want to travel a few kilometers north, there's Nanwan (南灣) which is an awesome but crowded beach. They have many water sport businesses that sell rides on a jet-ski or water tubes (of varying size and shape). When I was there I picked a set package of three (三合一) for $700 NT. Also, there's plenty of small restaurants, cafes and board rentals along the street across from the boardwalk. Clubs. You can't miss them along the Kenting main strip. The night market and the clubs start getting wild as soon as the sun starts to set. There's even a large and quite famous transvestite club. I haven't felt adventurous enough to go in, but perhaps some else would be willing to report back. As for food, the popular dish around the Kenting area seems to be Thai food, seafood and light meals like sandwiches and pasta. But all if not most restaurants have a nice surf shack feel to them, that really lends itself to the laid back atmosphere of Kenting. It's like no other place on the Taiwan island. 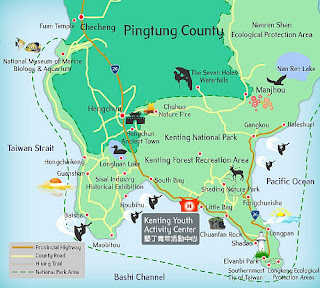 If you want a outdoor tiki torch BBQ with a pit roasted pig, then steer your nose to the Ceasar Hotel before sunset and grab a table by the street. Prices are about $1000/person, all you can eat and beer is extra. There are plenty of things to do outside of Kenting too. Unfortunately, they are some distance away. It's better to charter a taxi for 8 hours at $3000 NT or rent a scooter for $1000 NT a day (International driver's license required). You can watch the sun set from Eluanbi lighthouse, visit the National Museum of Marine Biology and Aquarium, soak in the Sichongxi hot springs (四重溪溫泉), hike in the Kenting Forest National Park or the Sheding Natural Area, go snorkeling, scuba diving or go-karting. There's so much more to write about, but i'll stop for now. I'll definitely be making a return visit and exploring some more.
Posted by B Huang at 11:30 PM