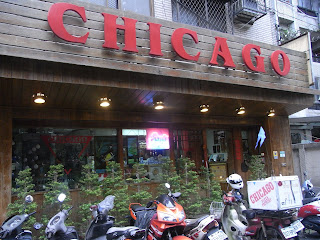 They serve the most killer pizza at Chicago Pizza Factory. Walking in, the decor really gave off a down home feel. It felt like I walked into someone's spare room filled with memorabilia clutter. After closer inspection, it all Chicago memorabilia. This really hits home for me. Looking around at some of the toys, signage, pictures, Cubs and Bears items, an old midway airport status board (i think)...really brings back the memories. However this only leaves room for about 4 tables. Once the owner discovered I was from the states, he opened up and started to speak in fluent English. He also spoke to my girlfriend in Japanese too, so he's at least trilingual. 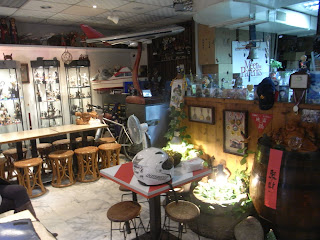 I learned Chicago Pizza Factory is actually a Japanese pizza brand, not a local restaurant started by a long time Chicago resident that moved to Taiwan as I would have assumed. Taiwan originally had 14 locations, if my memory serves me right. But the owner found it way too hard and stressful to manage 14 branches. He would teach the chef's how to properly make the dough and pizza, but after a month, they would cut corners and the quality would suffer. So he closed all but one location. Now he can get off of work at a reasonable hour and see his family and also personally manage the pizza quality. This means a lot. We ordered two pizzas because there was a special going on. 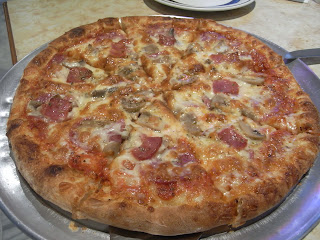 Looking through the menu, they had some localized versions with very odd ingredients and some traditional versions with american toppings as well. He recommended that I order it with extra thick crust and extra sauce option. That way it'll be closer to what I was used to in the states. The sauce really makes or breaks the flavor of a pie, so extra is a must. I don't understand how Taiwanese can call their bland sauceless pizzas, pizzas. I dreamed of a stuffed crust or a properly Chicago-style thick crust, but in the end the crust was about normal. Thick for a Taiwanese that's used to cracker crusts, but not thick enough for a die hard Chicago pizza fan. But don't get me wrong, it's still an exceptional crust. Crunchy, buttery and golden delicious! The owner said he only uses the freshest and most natural ingredients, so the crust will stay moist even eaten as leftovers. It won't get hard and dense like cheap crusts. But why not a super thick true Chicago-style thick crust? Because he used to do that on special order, but it would take up to an hour to cook. He discovered many customers were too impatient and complained of the wait time. So he trimmed the thickness and cook time down. They do make deliveries, but dine-in or pick-up will net you a better deal. Pies run about $300-400 for a 9" and $480-580 for a 14". 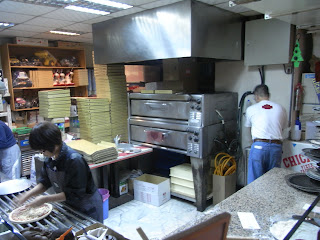