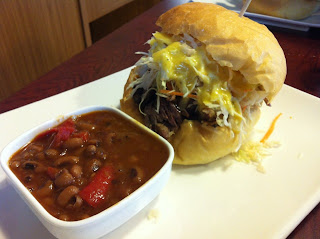 I've been craving and searching for a good american BBQ restaurant for a while. Maybe I wasn't searching that hard, as I didn't have high hopes for something like that. But fortunately through my cross-fit trainer, he introduced me to a BBQ joint opened by a foreigner in the jhongshan district 中山區. It's called Ed's Diner. Looking at their Facebook page, I see they ordered and imported a rather large oven. And judging by the stacks of wood, it's a wood burning oven. So I was salivating with anticipation of a properly slow cooked wood smoked BBQ pork/beef/chicken. I had to pick up my girlfriend from the Songshan airport today, right about the time for lunch. Coincidental timing. So we took a quick MRT ride over to Jianan Rd. MRT station (the same one next to Miramar mall). The walk over to the restaurant which didn't take long, about 10 minutes. When we arrived, it was empty because it was a bit early for lunch (a little past 11). But I wanted me some BBQ! The interior has a very simple American design of wood and brick. They only have about 12 tables, but I think I remember a few outside too. Walking through the saloon doors in the back, is the bathroom. The bathroom has a hawaiian theme to it. Odd. I don't see how that ties into the BBQ, unless they served some Kalua or Lau Lau, which they don't. But that's ok, perhaps Ed has a love for Hawaii too. On a tangent, this bring sup another good quest...Is there a good Hawaiian BBQ restaurant in Taipei? Now back to the BBQ, I ordered a pulled pork hamburger plate and my significant other, some BBQ chicken. The pulled pork turned out pretty delicious. Tender and juicy with that good porky flavor. The sauce was tangy but not too strong that it overpowered the flavor of the pulled pork. I was a tad disappointed with the smoke flavor though. It didn't have much. Perhaps it's because he's using 龍眼木 (roughly translated Dragon's Eye wood). I'm not familiar with that wood, but from my knowledge, cedar/hickory/mesquite would be the wood of choice. However I guess that type of wood may be hard to come by. In addition, it was raining that day. Perhaps the moisture got to the wood and the smoke wasn't able to penetrate to the meat properly. Furthermore, I felt the hamburger was a tad on the small side. My girl's BBQ chicken on the other hand was much better. Our meals came with a soup, salad (or fries) and baked beans (other sides available). The baked beans were good in my opinion. Soft, sweet and smokey in flavor. However my cross-fit trainer brings up a good point. Ed's Diner used black eyed peas instead of haricot beans. It's been so long since I had quality BBQ I totally overlooked that. Either way, it was still tasty and had a great smoky and sweet molasses flavor. I WANT to visit this place again. Perhaps with some of my foreign friends that miss good ol' down south BBQ. I was eyeing the brisket sandwich on the menu, so I'll be having you next time! Prices range from $150 to $350, with a wallet smashing $750 NT 14oz Angus beef prime rib steak. Browse their menu on their Facebook page.