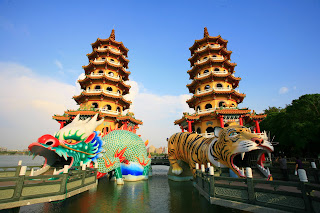 On Sunday we headed over to the Zuoying Lotus pond. Well actually it wasn't sunday, but I forgot the order I visited it since I'm writing this on Tuesday. The lotus pond was a cool sight to see. There are all these temples along the water with elaborate animal and buddha statues. One really really big buddha. A pair of animals, tiger and dragon, large enough to for you to walk through. If your visiting Kaohsiung, this is a definite stop. And while your using the MRT trains, stop by some of the famous stations that exibit art. Like the dome of lights at the Formosa Blvd station and the Central Park station courtyard. 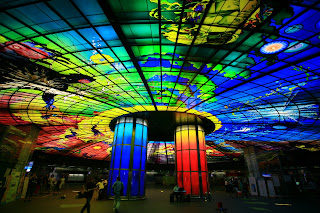 While talking to some of the other people we met at our hostel, they suggested Shousan mountain (壽山). This mountain is known to have many macaque monkeys that are very familiar with humans and get very close. They even heckle with tourists for food. So keep your wallets and food close and secure. We got to the mountain and found it to be much more unpaved and steeper than we thought. Towards the peek, it was pretty much climbing, not hiking. Worst of all, we didn't see any monkeys, which was the whole point. Perhaps we got the wrong trail. 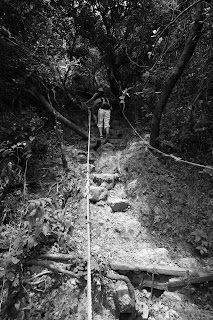 This trail was very narrow, dangerous, steep and we only saw a few people along the way. Not very easy going and touristy. We climbed it for about 2 hours and I was sweating buckets. After getting back down the mountain, we headed over to the Kaohsiung fisherman's warf for lunch. They have alot of nice and reasonable priced restaurants along the waterfront. We chose a greek restaurant since it was the first one open at that late of a lunch hour. After that, we headed over to the Former British Consulate at Takao. It too, like the lighthouse, has a great view of the harbour, but from the opposite side. It's apparently a very popular place to be as it was busy with visiters and mainland China tour groups. There's a large cafe in the courtyard out back and offers a stunning view. We stayed there to watch the sunset over the pacific ocean (or South China Sea). And with the sunset, I conclude this day's blog. See you next time. 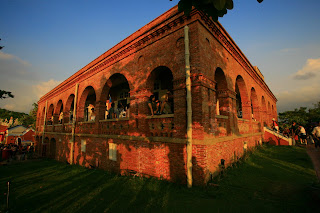 Email ThisBlogThis!Share to TwitterShare to FacebookShare to Pinterest
Labels: Kaohsiung