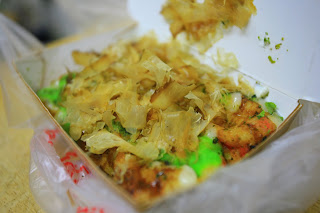 Takoyaki!!! They usually sell this all over the place, but it's not taht easy to find. This one was from Shida night market, but i definitly saw it at Shilin night market too. The one at Shilin tastes better though. According to my japanese classmate, it's not the traditional way of serving it either. The Shilin one doesn't include Nori seasoning, while the Shida one does. But both offer wasabi sauce which is a big No-No (Sacrilege!). I'm still not sure which one I prefer more, so I'll just have to eat try it again, over and over. Lucky me! Takoyaki!!!

OKso the picture isn't that good, you can't see the takoyaki underneath all those bonito flakes. If i get a better picture later, I'll replace it :)
Posted by B Huang at 10:31 PM