The day for my one year anniversary with Yuki is coming up. However with the coming arrival of my parents next week, we thought this weekend would be a last time to celebrate it privately. So for dinner we decided to go to a Taiwanese german restaurant at the top floor of the Q Square mall. It's called Leble'dor. It's a famous Taiwanese beer brand that is heavily influenced by the german art of beer. It was first introduced to me at CitySuper market in Sogo Tianmu by a sales representative. It tasted awesome! I mean Taiwan beer (the brand) has it's merits, but not for it's superior taste. The beer brewers at Leble'dor really did their research. It's some great tasting beer similar to what you'd find with American microbrews like Blue Moon, Fat Tire, Longboard or Anchor Steam. So we were much anticipating our first experience to eat and drink there (on tap). Walking in, the interior design is reminiscent of a log cabin/wine cellar. With wood logs, iron fencing, stone, wood barrels and candle chandeliers, it really gives off a warm cozy atmosphere. first things first, two 40oz steins of seasonal beer please! The selections were Hefe-weizen, Honey, Dunkel, Seasonal Lager. Looking through the menu, it's' mainly a mish-mash of fusion asian, german and american fare. Pizza, salads, bratwursts, onion rings, steaks, fries, pasta, hot pot, soup and mexican. We ordered a mix of food + one recommended: the garlic beer-flavored shrimps (recommended), beef steak with sauce, onion rings. The food turned out pretty good. Well as far as onion rings, steak and fries goes. Perhaps because I've been an American for too long, I don't find a good set of fries, onion rings and steak as that special. But I'll give Leble'dor credit in that, those were one of the best fries and onion rings i've had so far in Taipei. Next time I really want to try out their pork knuckles, german sausage platter and grilled chicken leg cartilage. The only disappointing part is the most shocking to me. 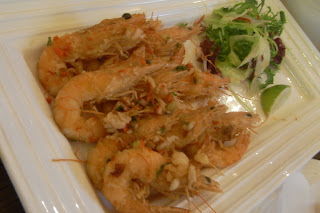 The beer! It still has the same great taste that I had at Sogo, but they served it mildly cold. Beer needs to be served ice cold! I asked the waiter if he could bring me back an ice cold one, but he said that's the temperature they keep their refrigerator at. So much research and development went into some great beer that the Taiwanese can call their own, and they shoot themselves in the foot by serving it under chilled :(. Their own bottle even says serve chilled at 5° C. I definitely want to revisit this restaurant in the future. I love the beer and the menu looks delicious (albeit more american than german), but please oh please put my beer in the freezer for 15 minutes before serving it to me. As a side note, You can go to the many other Lebre'dor locations around Taiwan and buy the liter bottles of any of the four varieties. The Sogo CitySuper in Tianmu seems to only sell the Lager and Dunkel.