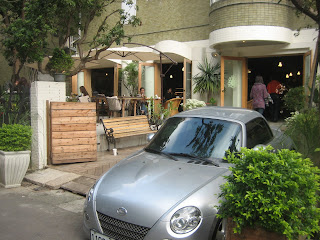 Today Yuki and I decided to hang out with some of our female friends and show them around the Dongqu area (東區). Unfortunately, we didn't expect to walk into a ghost town. This area is usually a very trendy and busy area for young adults. However. I guess on an early Sunday noon hour, all the shop owners are sleeping in. Thus there wasn't much to see other than window shopping (literally). Since it was too early, we decided to take an early lunch. Earlier last week, Yuki discovered a nice cafe with a large outdoor patio in the Dongqu area and wanted to try it out. I forgot the name, sorry. It has a small driveway in the front, leading to a large double door. Once inside you get a nice sensation of industrial cement, mixed with earthy wood and muted photos. Nice, but I'm not sure what it reminds me of. We ended up outside on the patio anyways. Just as we sat down, the sun started to peek through and warm us up. The weather was starting to agree with me. Slightly cool in the shade and slightly warm in the sun. We each ordered our meals. 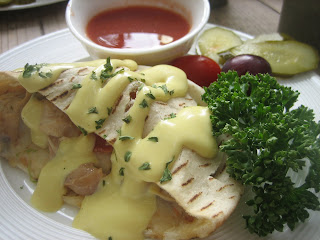 Some soup, grilled chicken pita and nachos. I didn't try out the soup, but it looked very creamy and tasty (cream of corn). My grilled chicken pita ended up being OK. The pita bread was over grilled, so it was too fragile to pick up and eat. Putting wasabi mayonnaise on it didn't help either. So I guess they expect you to fork and knife it. That ok, I can roll with that. The chicken was pretty good as it really works with that wasabi mayonnaise, but not spectacular. It could have been larger (slightly smaller than my hand) for the price of $220. The nachos was by far the worst disappointment. It's Doritos with flavorless sour cream, sweet salsa and so called "nacho cheese" orange sauce. Yuki said the tastes didn't match. 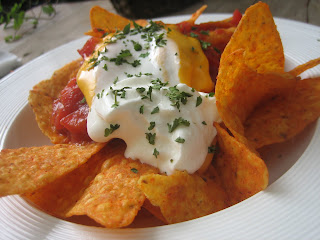 According to her, the Doritos have too strong of a processed cheese flavor and it clashed with the salsa and sour cream. There's a reason why it's done with Tortilla chips. Unfortunately, we didn't get to try out any coffee. Perhaps that's where their skills are at. In my opinion, this place is like a dumb supermodel; Pretty on the outside, but damn bland and empty on the inside. If you happen to end up at this joint, please stay away from the food. The chef needs to go back to culinary school or arrested for selling overpriced Dorito chips. After our lackluster lunch, we continued our troll around the Dongqu area. Thankfully some of the shops started opening up. It was around 1:30 in the afternoon. So note to readers, don't come here before 2pm on a Sunday, it's deadsville. Luckly, along with the weather, shopping got more sunny and bright. We discovered a cute little treats and tea shop with a heavy influence of white and pink antique decor. 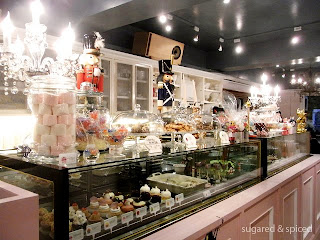 It had a vintage (possible circa 1940's) expresso machine. The tall shiny copper ones with elaborate designs on the corners. And glass tubes of various hard candies lined up in the front, reminiscent of an victorian candy shop of yesteryear. There's also a small gift shop in the back full of unique food themed gifts. Although this is much better suited for females only, it won't look awkward as long as you have a few female companions in the vicinity. Haha. I wouldn't mind having high tea with cupcakes here. This store is called VVG Bon Bon and the cupcakes run about $80 NT each. *Photo from Google Images. After that, we hopped on to the MRT over to Ximending to look for some messenger bags. But you don't want to hear about that. Fast forward a few hours, my friends all headed home as I headed over to church.

Later on in the night, post church, Yuki and I decided to check out a new indian + pizza place at the Shida night market with some new friends that we met in church in tow. We walked through the heavy crowds to finally arrive at the end of a street in the Shida night market. Newly opened and rather busy, it's called Bollywood Pizza. Lucky we were early enough to not have to wait for a table of five. Because shortly thereafter, the restaurant started to fill up. We ordered a thai chicken pizza and a lamb curry pizza along with a pasta. The pizzas were a bit pricey at $300+ per pie. One could suffice for two people, however two small people. I'm pretty sure I can finish a whole one by myself. The pizzas ended up pretty tasty. Although, not a lot of spice as I had hoped, as it may be more catered to the Taiwanese taste buds. Oddly enough, I found the Thai chicken pizza better than the Lamb Masala pizza. However I have three big gripes with the pizza. 1. All the indian pizzas are masala curry based. No tandoori, Makhani, Vindaloo in site. Come on, lets get some variety here! 2. Pees! What the hell are peas doing on my pizza! 3. Shitty thin crumbly bread. It's more like toasted pita bread than pizza bread. I think I have to blame the Taiwanese influence here. Most "pizza" places I go to in Taiwan prefer to use this thin, flavorless toasted pita bread type crust and pass it off as pizza bread. The one at Bollywood Pizza was the worst, it couldn't hold up it own weight because it was so weak and thin. It makes it a very annoying and messy dining experience having to use a fork to eat most of my pizza that just fell onto my plate. The pasta was so-so. Not exactly sure what it was, but it tasted fine, despite being drenched in sauce. I felt like I was eating noodle soup, not pasta. To the owner, if you ever get a chance to read this, use some real pizza bread and you might have two decent pizza dishes. Otherwise, I don't see this restaurant lasting more than 3 months after the "new place" allure dies down.

Lastly, for dessert we headed to a Hong Kong style restaurant in the Shida night market. Now this deserves a new paragraph. I've eaten here before when I tried out their pineapple bun (菠蘿包, Bo Luo Bao) to-go, but never entered the restaurant. They actually call it ice-fire pineapple bun with butter (冰火菠蘿油). The name of the place is hohomei (好好味港式菠蘿包). Despite the small store front, there is usually always a huge crowd waiting outside for their order of pineapple bun (Save $10 NT if you take it to go). The small front eludes to a small dining area, but in fact it's quite large and occupies two floors. Since most of the people are outside taking it to go, it wasn't difficult to find seating for 5. Once inside, I have to say, I LOVE the interior decorations. The owner, which I am honored to have met, imported over several trinkets, stairwell railings, wallpaper, movie posters from Hong Kong to decorate the place. It really gives it the feeling of a 1970's Hong Kong diner (茶餐廳). Yes, I wrote stairwell railings. Soo distinctly Hong Kong and so cool. Moving on to the food. The pineapple bun was as excellent as ever. I don't know how they get the top so crunchy, but it adds a new depth to the texture. They also sandwich a slab of butter in the middle. Totally not healthy, but you can opt for it without butter, and it would still taste awesome. The HK milk tea was also good in it's own right. 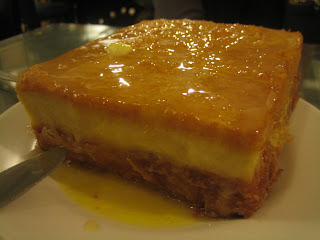 In addition to the pineapple bun, we ordered 法蘭西多士。 I'm not sure what it is, but it comes recommended by the owner. It's like a peanut butter cake with butter and pastry flake. I don't know how to better describe it. Tastes awesome, but it doesn't matter, go there, order it, put it in your mouth and enjoy. Since we already had dinner, we didn't get a chance to try out their cantonese cuisine, but my friend says it's close to authentic. So i'll take his word on it and definitely put that on my list of must try out next time I'm in the Shida night market. The prices are decent hovering below or slightly above $100 NT. The Dinxi 茶餐廳 was not satisfactory for me as a proper HK style diner (茶餐廳) and it takes advantage of the Hong Kong name by putting a premium on in it's pricing. Oh one last thing, to "Custard" girl if your reading this, 好好味港式菠蘿包 has egg custard buns (奶黃包)!