New pizza place in my neighborhood 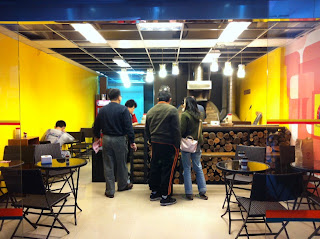 A new pizza place just opened up in my neighborhood. It's called Mr. Pizza. Today was the grand opening. It touts itself as a wood fired pizza place. So after a leisurely day of more rock climbing, Yuki and I headed over to check it out. Fortunately, we headed there super early, because there was a 4 hour wait for the pizza. We ordered at 4 pm and they said it would be ready by 8 pm. By the time 8 pm rolled around, we were both pretty hungry. The pizzas are indeed wood fired as can be seen by the stacks of wood kindles piled outside. The stove is a bit crudely constructed though. mostly of brick and spare parts it seems. But the oven bed did seem like it was made of one piece of large ceramic. The interior lacked design and looked like it was haphazardly put together at the last moment. Which could be the case, since they are newly opened and perhaps wanted to make the due date. What's important is the pizza pie. At $160 a pie, it is a bit expensive. Although Yuki and I shared one, one was not enough. I can see myself easily finishing one whole pie myself (approx. 10 inches). The taste, wasn't that bad. Pretty darn good I must say. Yuki says it's the best she's had outside of Aunt Su's. 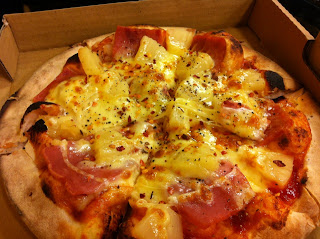 But there's still two negatives I'd like to get out there. First off, there's no parmesan cheese! Hot pepper, salt and pepper. Salt and pepper!? WTF? Secondly, I hate thin crust. Granted it wasn't as thin and crappy as Bollywood Pizza, but it's still a thin flavorless toasted flatbread-like crust. I don't get it. Do the Taiwanese prefer it like that or has no one taught them how to make decent pizza bread. I'm undecided on this place. Super convienant, wood fired, tasty toppings versus overpriced flavorless flatbread.