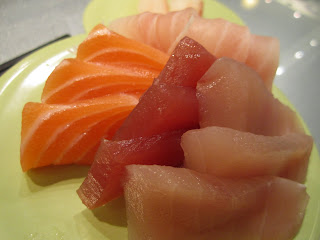 So i'd like to say now, for a student of a very tight budget, the ability to still be able to eat sushi is awesome. Thank you Sushi Express! Yuki and I have gone back to SushiX a few times in the past month. Since we usually go there after I get off from class, we frequent the location near the Guting MRT station. I'm still a fan of quality Sushi, but I'm such a fan of sushi, I can't do without it in my daily diet. So as my only alternative for cheaper sushi, it's really not that bad. The cuts are thick, the fat distribution is good and they seem relatively fresh. I usually get 16 slices of sashimi and 2 nigiri and a bowl of miso soup. Total cost $180 NT ($6). Wow, I think i've adjusted to the cost difference here in Taiwan. After converting the cost, $6 is hella (excuse my California slang) cheap! On top of that, I still haven't gotten sick from it the day after. Well, I think last time I wasn't able to provide pictures of the sushi, so this time I made sure to snap a few for you readers. You be the judge! What do you think, at least from a visual standpoint?? 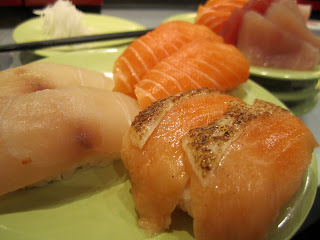 Email ThisBlogThis!Share to TwitterShare to FacebookShare to Pinterest
Labels: Sushi