Mexican dinner with a panda

Tonight was a unprecedented evening for this blog. It's the first time I got to meet one of my blog readers, in person, for the first time. Is she some creepy weird psychopath that i'll regret meeting? haha, No. She turned out just fine. She is cheerful, an ease to be around with, sociable and eager to be here in Taiwan to learn Chinese. Although I'm sure my blog had a very minor influence, it makes me proud I started something of value and where I have opportunities to meet some genuinely good people as a bonus. This blog started out only as my personnel online journal of my stay here in Taiwan. But then my stay, originally expected to only be temporary, has turned into a much longer if not permanent stay. And my blog has changed from a private log to a food blog to a blog that a few strangers follow along with on my adventures here in Taiwan. Hopefully I can meet some you that are reading this or at the very least, the information I post will be of help to you. So I dedicate this entry to "panda" (i'm not sure if she wants to be mentioned by her real name). Thank you! 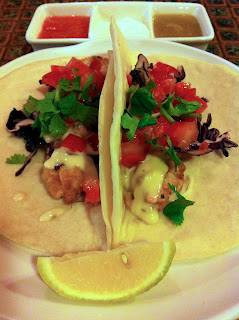 I'll try to keep it short and simple for tonight's epicurean adventure. I went with "panda" and my girlfriend to Eddy's Cantina. This is also another mexican restaurant that I've been wishing to try out ever since I saw their business card on the bulletin board at my gym. It's in Tianmu near the Taipei American School. Story goes, Eddy is Mexican by ethnicity and Canadian by birth, then later moved to Taiwan. He decided to open a Mexican cantina in two locations: Tianmu and DanShui, using the recipes passed down to him from his family. The food turned out to be OK. But it's partially my fault for ordering a burrito, which is about as mexican as Jay Leno. What can I say, I'm from California and I love me some burritos. My burrito was typical tasting. The skin was warm, powdered with dough to give it that made at home texture. But it ended up being too thin and broke up easily spilling out my burrito contents. I ended up resorting to a fork and knife. Macho Tacos still prefered on this one. On the other hand, Yuki ordered the tacos and she said they were pretty damn good. "Panda" said her's was pretty good too, and the spicy salsa is spicy haha. I'd be willing to have a second go at this place since it's so close by my home. Damage to the wallet is around $200+, thus not considered a cheap eat, but a moderate infliction.