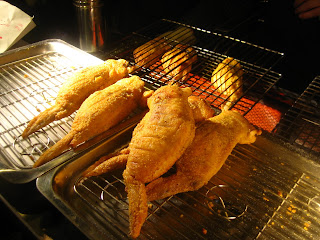 The last few days with my California church friends here in Taipei has been exciting. However, tonight was the last night and the last chance to experience the night markets of Taipei. So we went to the Raohe night market. The last on the list. Once there, I discovered these chicken wings. They are not your normal chicken wings. First off, they're boneless for the win. I hate picking out bones, it's annoying. Second, they're stuffed with rice. The rice comes in two flavors, one is Taiwanese sticky rice (油飯) and the other is Thai flavored rice (泰式吵飯). I chose the Thai flavor as i'm a fan of strong flavors. Awesome idea! It ended up being deliciously awesome. The stuffing could of had a stronger flavor, but it's still a killer snack. The breading has the same texture as Shake-N-Bake which I kind of liked. It's no panko, but it'll do. So basically they're definitely on to something good. The combination of the Thai flavored rice stuffed in a deep fried breaded boneless chicken wing tastes great together. KFC should pick this up (if they haven't already, I don't eat KFC often)! I'd just improve the flavor of the stuffing and keep the Shake-N-Bake breading. Two thumbs up! I want to go back and get another two. Anyone want to go with me? 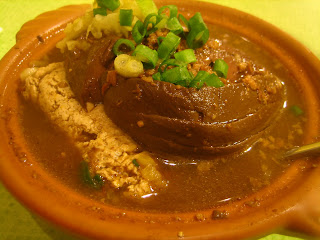 This second photo is of duck blood stinky tofu soup. Foreigner's be warned. It's a very strong Taiwanese flavor and odor. I think it's delicious, but probably way over the comfort bar of a western foreigner. It's common. Nothing special. You can probably order this at any night market restaurant. But I thought my parents would appreciate this photo. MMmmmm stinky, irony, tasty duck blood stinky tofu soup!
Posted by B Huang at 9:20 PM