Oh I want my Baby Back Ribs! 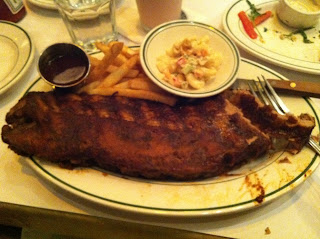 For the last of the three restaurants and for American food, we went to Dan Ryan's Chicago Grill. FINALLY, I get to go to this place after passing by it several times and reading about it online. Not only is it known for it's western food and western portions, but it praises itself in representing a Chicago style restaurant. Being born and raised in Chicago, I was very eager to try to place out. So after a fine afternoon at Maokong, we headed down to the closest station. Nanjing East Road MRT station. It's called 芝加哥餐廳 in Chinese, which directly translated just means Chicago Restaurant. Lame. Anyways, to begin, the decor is very old school Italian steakhouse. This is true to Chicago. There's heavy influence of Italians in Chicago so a lot of the steak houses have that similar dimly lit, red leather covered booths with high wall seat back made of wood. If you've been to a Maggiano's before, it's similar to that. Although we basically went to for steak, looking at the menu, they also offer hamburgers, salads and pastas. I didn't see any deep dish pizzas or Vienna hot dogs, but this is supposed to be in the fashion of a grill house, not a pizzeria. But it'd be nice to have a real Chicago style deep dish pizza in Taipei wouldn't it? I'd be the first to line up for it. We ordered crab cakes for appetizers, then for the main course; filet mignon, prime rib and baby back ribs (full slab) for myself. They are big portions! I've gotten too used to the asian portions, i've forgotten how large the portion size was in the states. Now I know how I got fat. The filet mignon was tender and juicy from what Yuki's mom said. The prime rib was bloody and it did come with a cup of it's own juices to use for dipping. However they did not offer horseradish, but I never asked for it either. I ordered the baby back ribs however. It's been a while since I had a good slab. Although it was quite tasty, it was no 18 hour fall-off-the-bone smoked ribs. 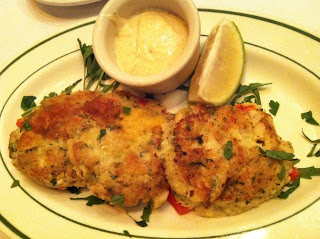 But I'll still give it credit, with the help of a fork and a knife, the juicy meat did scrap off cleanly. They do offer garlic fries, but only as a independent order. The service is ok and they did know English since they probably have their share of american foreigners visit. This place will put a hurt on the pocket book though. Expect the damages to be around $500-1000 per person depending on appetizers, drinks and desserts ordered. I recommend this place, it's excellent. I'd bring my friends back here once I have the cash flow and a larger belt. I've also heard of another western restaurant called Carnegie's, although it's more of a Bennigans/TGIF party atmosphere than the gentlemen's grill house that Dan Ryan's is. Until my next epicurean adventure...good night!

*Note: While at Dan Ryan's they informed us that they're moving to Xinyi district near 101, inside of a mall. So the independent location listed above will be closed by January 2012.
Posted by B Huang at 10:40 PM