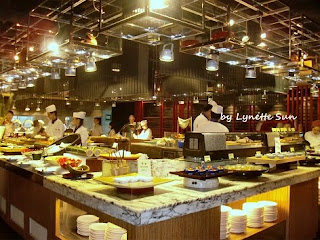 The second selection of the three restaurants was Shin Yeh. Shin Yeh is a Taiwanese restaurant that usually serves Taiwanese food, but they have one location that serves Japanese style. At first I thought it was the 101 Shin Kong Mitsukoshi location, but it isn't. Yuki had the privilege of picking out this restaurant. Although it's not truly Japanese fare, she opted to not go completely Japanese with more traditional Japanese food. The Japanese branch of the Shin Yeh is near the Zhongxiao Fuxing MRT station. When you first walk in, you'll see a female receptionist greet you in a traditional kimono in a black marble lobby accented with wood and japanese decor. They have table downstairs, but hopefully you won't be seated at any of those because all the food is upstairs. Fortunately we got seated upstairs next to the windows. The food turned out to be pretty darn good. Of course, there is still a lot of Taiwanese dishes and Taiwanese influenced Japanese dishes, but it's delicious. They also have unlimited beer (Taiwan beer not Asahi, sadly), wine and champaign. My only complaint about the food is the sushi selection. Other than the boring shrimp, eel, egg, octopus sushi, they only had yellowtail, salmon and tuna. But Yuki pointed something out that I never noticed before. Taiwan really doesn't have any sushi selection outside of tuna, salmon and yellowtail. Unless you go to a ridiculously expensive Japanese restaurant that can import more fish varieties. It seems to always be these same three selections. Well, in the end, I still enjoyed myself and left with a very happy tummy. The decor, food, drinks, desserts, service was all good to great. I don't remember the price tag, but expect somewhere between $500-600 NT/person. Once again I must apologize for coming back with no photos. Enjoy the one I stole from Lynette Sun courtesy of Google Images, LOL.