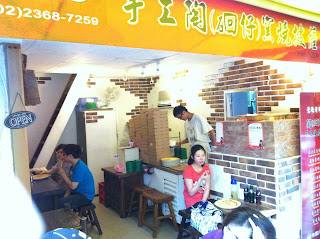 So today's plan is to have a relaxing day. Three things to do. Watch Transformers 3, eat lunch and find a special place to eat dinner. Why is it so special? Because it's my one year anniversary of living here in Taipei! For those of you that have followed me since the beginning know that I arrived July 24, 2010. So today, Sunday, would an exact year to the day that I have lived in Taiwan. After a lazy morning, sleeping in and missing breakfast in trade for some TV time in bed, we headed out to Gongguan. Yuki had to do get a chore out of the way first. She had to go to the Gjun office, which is a Taiwanese computer training center. She's signing up for 3DS Max classes. All the classes are in Chinese, so that'll be very challenging. I applaud her for her enthusiasm and will. Moving on to lunch, we went to a small pizza place down a small alley (not even sure it has a street name). It's a very small joint as you can see from the pictures. Seating for about 10 people. The decor, …well they tried. 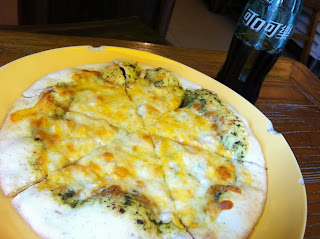 Fake bricks glued to the walls to make it look like an old style pizza place. But decor has nothing to do with the food. So continuing, we originally thought it used a ceramic oven, but a quick glance at the oven, we discovered it was only electric. They buried this giant electric toaster (taiwanese oven), behind a wall to make it look like it's a brick oven. Disappointing, but i'm willing to let that go because of the cheap price. Their menu consists of about 8 styles of pizza; vegetable, hawaiian, pesto chicken, mushroom, seafood, margarita…thats about all I can remember. Each pizza is about 10"s sliced six ways. All this for $100 NT. The taste conclusion, somewhere under so-so. The crust was thin, crispy and flavorless. I blame it on the lack of dough used and the electric oven. You just won't get the same flavor as a brick oven cooked with wood/coal. Even NY thin crust has more buttery, doughy flavor than this. The toppings, could use improvement. Not enough basil, not enough herbs and the tomato sauce...what tomato sauce!? The cheese wasn't bad though. I don't get that wonderful mozzarella flavor, but it was very hot and "cheesy". So overall, bad pizza. And being in Taiwan isn't an excuse because i've had decent pizza in Taiwan. But again, Taiwan's strong point is, it's CHEAP! $100NT ($20NT glass bottle coke) for a whole pizza isn't bad. If I visit again, I'll try the seafood. After filling our tummies, we headed over to the Gongguan movie theater. Student pricing, $300 for Transformers 3 3D. Although several of my friends have criticized it, I thought it was a decent movie. Tons of CG and long action scenes. Although the story may be cheesy or shallow for some people, I've been a fan of Transformers since youth, so I don't care. However I did miss Megan Fox. The relationship between Mikeala and Sam was built up over the first two movies, so it's a strong disappointment and sense of rejection over the new hot blonde replacement. In addition, her role in the film really isn't that powerful. At least Mikeala was smart, useful and independent. I've read that it was both the studio's fault as well as Megan Fox's fault for not returning for the third and final installment. In a nutshell, wiki said Megan Fox didn't realize filming a blockbuster film required hard work and long hours. What a prima donna. Anyways, if you want to watch two and a half hours of CG robots, CG action, gun-play and cool cars, then watch Transformers 3 in 3D. Otherwise save your money for the DVD. Moving on to dinner. I decided to splurge a little and eat at a All-You-Can-Eat grilled meat restaurant (吃到飽燒肉). It's in Gongguan and called 燒肉王子 (grilled meat prince if translated). 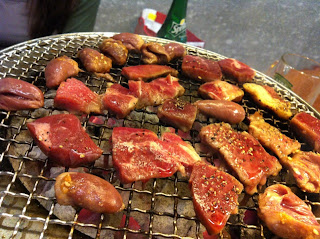 The damage came out to be just under $500 NT per piggy. But the quality of the meat was pretty good as well as a wide variety of cuts. They had beef, pork, chicken, lamb, seafood and vegetables. For drinks, unlimited Taiwan beer and juices and soda. For dessert, unlimited Meiji ice cream as well as Ice cream filled grilled mochi. The waiters/waitresses were very nice and helpful, often getting another bottle of coke for me or helping me grill the meats. They also taught me how to grill mochi and stuff it with ice cream. Overall it was a very belly busting, fun and positive experience. If there was one thing I had to complain about, is the height of the grill and the exhaust hood. The grill is placed on top of the table, instead of inside a cubby hole IN the table, making it high even for someone as tall as me. In addition, the exhaust hood is too low, which means banging my head. I may or may not have a return visit, not because of the restaurant, but because $500 is about the normal price for a AYCE DIY grill. So there are other places that may be better, for the same price. Well, this has probably been one of my longer entries into this 1 year old blog. So I end it with, Cheers (gan bei,乾杯) !! To another year of food hunting and exciting new discoveries in Taiwan!