The roof is on fire! 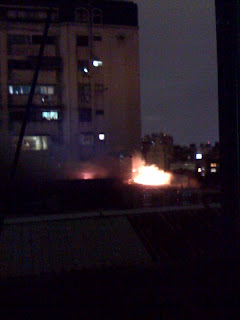 Today is a continuation of yesterday. We decided to head back to Songshan Tobacco Factory to finish off the exhibits that we didn't get a chance to see on Saturday. The main halls 1-5, were the largest exhibits and had the longest waiting line. So it still took us until early evening to finish off the last 5 exhibit halls out of 14. After finished up the first location, we took a free shuttle to the second location at Taipei World Trade Center exhibition hall. But in the end, we gave up. It was getting late and we were tired. I also had to head to church at 5:30. Normally, I wouldn't mention anything about Church but this evening ended spectacularly. Well at least for me. First, near the end of service, the building next to us caught on fire. I think it first started on the roof, then spread to the entire building. It was approximately 50 feet away. I could feel the heat from the fire. 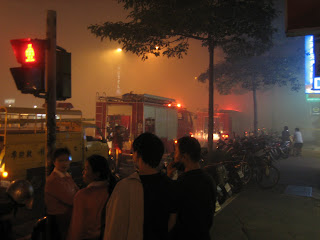 Sparks were flying, flames were licking the aluminum roofs, thick black smoke was billowing from the fire and electrical units were exploding due to the heat. So the service ended prematurely and we all headed out for dinner as a safety measure from the fire. We ended up having dinner at Macho Tacos (Shida location). Yes, a second location to my favorite (and only) fresh-mex restaurant. They open right next to my school, and after I no longer go there. How unfair. But at least i'm there often, so it add fresh-mex to the option of foods to the Shida area. Coming back from dinner, the firemen were still trying to put out the flames. Fortunately, it seems everyone got out fine and no one was injured. But it made me realize with such a vertically packed city with disorganized alley ways, it must be very difficult for firetrucks to navigate directly to the optimal position to fight a high-rise fire. This blog post goes out to the brave fire men of the Taipei Fire department. God bless you!

Macho Tacos (Shida location)
台北市大安區浦城街15號
No. 15, Pǔchéng St, Daan District (Taipower or Guting MRT would be the closest)
Posted by B Huang at 6:32 PM