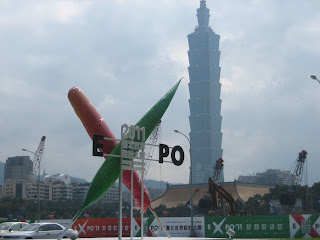 Today I went to the Taipei International Design Expo 2011. It was the last weekend so it was my last chance to see it. It's actually gigantic and spans three locations. It's all forms of design including environmental, building, interior, architecture, product, advertisement, media, etc. I went to the old Songshan Tobacco Factory location. It's a collection of rustic old cement buildings much like Huashan Creative Park 1914. It boasts a beautiful garden with a large fountain in the atrium though. As with Huashan, the city uses these old historic locations to hold art events or music events, to help fund the preservation of the buildings. Back to the expo, It turned out to be pretty cool. Being free of cost was also a very kind gesture. Some of the painted art and interior design, I didn't have much interest in. But the product design, packaging design and technological design were very interesting. Basically anything with a model or physical object to see. haha. Although it was a design expo, I did find parts of it more of an art show than a design concept exhibition. And of course the Made In Taiwan product had a big presence there. 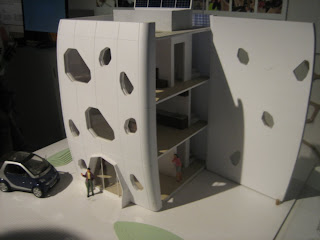 The Taiwanese are very proud of their creative, out-of-the-box, Taiwanese design products. I bought a 8-bit rubber alien earphone cord organizer. It's cute. The earphones snap in to form the eyes, then you wrap the cord around it's body and finally stick the audio plug up it's butt-ular region. It was a fun day! Even though we had plans to visit the second location on the same day, we never finished the first location. So there's plenty to see when you're taking your time. After that, Yuki and I went to Ikea. It was my first time at an Ikea here in Taipei. 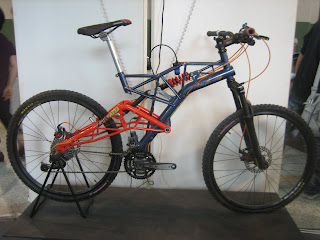 It's near the Nanjing East rd. MRT station and right next to the Momo mall. Taking a rest, we went straight to the Ikea cafeteria for some drinks and sweets. I don't quite remember the prices of the swedish meatballs in the US, but I think it's more expensive here in Taipei. $200 NT or $7 USD. With an order of pasta, a side dish and a drink, it's run over $300NT. I don't think the Taiwanese think Ikea food is as "cheap eats" as we do in the States. After the refreshments, we were recharged to do a little shopping in Ikea. It's set up exactly the same and let me just say, I really miss Ikea. They have a lot of simple, cheap but creative ideas for furniture. I reminisced about the times at Ikea buying cups, utensils, picture frames, lights, pillows, comforter covers, tables, etc. Their living room, kitchen and bedroom displays really temp you to buy something you really don't need so perhaps your place can look just like that. It makes me want to replace the aging furniture at my current place! Haha! Alas no, But perhaps at a later time. I really don't know why Ikea makes me happy and want to buy stuff. Wonderful marketing strategy! Lastly, after Ikea, we headed over to the Momo mall next door. Yuki said I have visited this mall before, but I have no recollection of it. 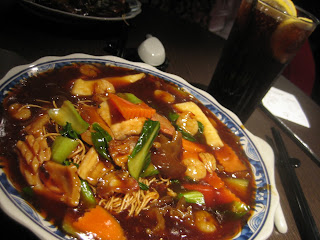 Perhaps it was another city. But she assured me it was a crappy mall anyways and not worth the time to shop there. So we headed down to it's food court, which is more promising. Along with your typical chinese, Thai, steak, italian, Indian food at mall food courts, we found a Hong Kong Cantonese tea diner (茶餐廳). They're the restaurants made famous in Hong Kong, known for being open 24 hours. There you can always get a simple and cheap Cantonese meal. Although the one we went to was much fancier than what you'd find in HK and definitely not open 24 hours. But they did have Chow Mien (炒麵) with lemon coke. I love Cantonese food and I really don't know much about it. I should get to know it more in the future. 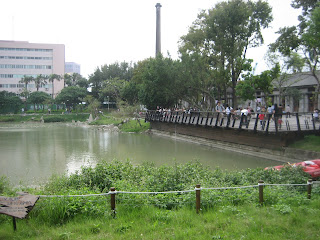 Songshan Tobacco Factory
110台灣台北市信義區光復南路133號
Posted by B Huang at 11:30 PM