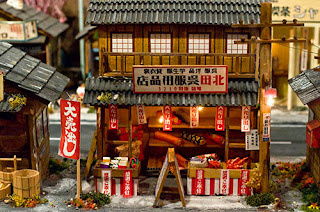 Miniatures! I've always been fascinated with miniatures. I think it's been instilled into our childhood exeriences to like miniatures. Because most toys are pretty much miniatures anyways. Girls get miniature dolls and boys get miniature cars (excuse the stereotype). And the more details involved the more they fascinate me. I've build plenty of scale models in my youth, and it just got more fun the higher the difficulty rating got, because it would include articulating windows or arms or gun turrets. Anyways, the day started of pretty dreary and grey, so Yuki and I grabbed our umbrellas and headed over to the Miniature Museum of Taipei. It's not too far from the SongJiang NanJing MRT station (捷運松江南京站)。 The miniature museum of one of two in Taipei area. The second and much larger outdoor location is called Window On China in Longtan (龍潭鄉). I didn't feel up to bringing my camera today, so I just stole one from Google images. All the scale reproductions were extremely well put together. Most of them were of european and american style houses and castles. However there were a few asian themed examples too. My favorite is the miniature of an old japanese street with food and service stands possible from the 1960's era. There are even some of the beautiful victorian homes of San Francisco. Some miniature rooms, as Yuki pointed out, included a miniature within a miniature. It's really a cool place to visit and convenient to get to. The Entrance cost was $180NT. Student fee is $150 but my school doesn't count. The gift store has miniature kits, so you can bring some home and try for yourself too. Overall, a great place to visit while in Taipei. It's one of the less popular places that may not be in a tourist book. 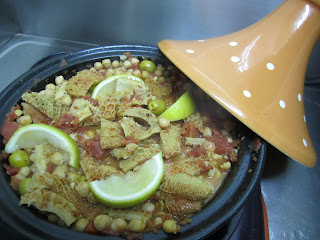 This is all we pretty much did for the day. Relaxing and stress free and most importantly cheap. heh! So for dinner we grabbed some ingredients and tried out the next recipe in Yuki's Tajine cookbook. Lemon Tripe with chickpeas. It turned out sour and powerful in flavor with the great chewy texture of tripe. Although probably too chewy. It was our first time cooking with Tripe. We found out later, after dinner, that it helps soften the Tripe if you soak it in a brine solution for 2 hours prior to cooking. Next time.