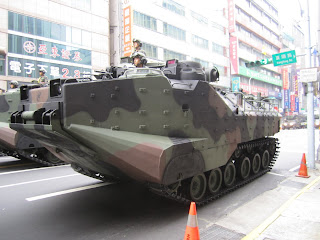 Monday 10/10 will be the 100 year Anniversary/Birthday of Taiwan. So through out the weekend will be celebrations. Yuki, our friend and I headed out to the Taipei Main station area in search of a Russian restaurant called Cafe Astoria. Little did we know, the celebrations had already started or what it involved. The big main streets around the Presidental Palace were all closed off for the parade. When we arrived, we saw rows and rows of military vehicles and military personnel. It looked liked the city declared martial law or something. It's the first time I've seen a line of so many military vehicles driving on the city streets. People were taking pictures, dancing and celebrating along side too. I didn't get any pictures of the main stage or performances though. I'll probably regret this years down the road as this is probably THE most significant celebration for Taiwan for decades to come. It's Taiwan's big 100 birthday! However in the spirit of discovering Taipei on it's birthday, we did the best thing you can do when exploring...get lost! As the tanks distracted us, we walked further along down the parade line to see more of what was going on. Then I discovered something. A big book store full of English technology books. Some used, some new. It's a goldmine! I was disappointed earlier when I found it difficult to find English technology books here in Taiwan compared to the relative ease in Hong Kong. I thought I had to ask my parents to buy it in the States and ship it over. I'm so thankful I found a English book store, and a rather large one at it. I now have no excuse to not pick up a book on Java or PHP. The store's name is Ten Long Computer Book Co. Further on, and with our stomaches growling, we hunted down the Russian restaurant and bakery. However once on arrival, we peeked at the menu and made a judgment that it was too expensive for our pocketbooks. Perhaps next time when I have more padding in my pockets. So we went exploring to another part of town and discovered an awesome little chinese restaurant specializing in spring roll wrapped cuisine. It's next to the 228 Memorial Park. 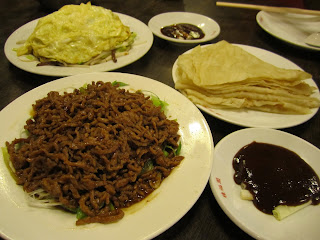 It's chinese name is 種福園斤餅牛肉店. The waiter and possible the owner, helped us order. Since we acknowledged it was our first time there, he quickly recommended the three most popular dishes and a bowl of soup for each. The owner and his wife (I think), were very very friendly. The meal was spectacular! The mixed vegetable dish was tasty. The shredded meat was juicy and savory! The shrimp was fresh and QQ! You just take the meat/vegetables, wrap it a warm spring roll and dip it in what I think is chinese oyster sauce. It's very similar to the spring roll wrapped Beijing duck. It's absolutely delicious and a hidden gem of a restaurant. You'd never know this place existed even if you walked by the storefront. The cost came in at around $300 NT a person. But in my opinion it was well worth it! It's on my list of restaurants to revisit with friend's that want to experience more "Local" cuisine. The photos don't do it justice. 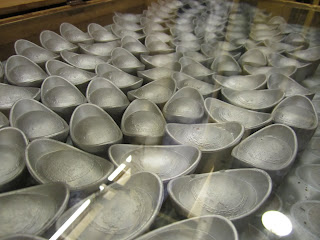 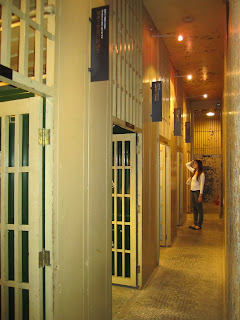 While exploring around the Presidental Palace, we discovered a natural history and bank museum. The building was the original site of the Land Bank Taiwan. The story goes, that a museum of natural history defaulted on a loan, so the bank seized the dinosaur bones and other items. It has since been erected into a small but packed natural history exhibit inside the old Land Bank building. Since today was the 100 year birthday of Taiwan, the museum allowed Free entrance to everyone. How kind! However my friend was deathly scared of dinosaur and shark bone recreations. So we quickly breezed through that. On the way out, towards the back of the building, was the historical display of the bank. According to the facts written on the walls, the building was once a large bank owned by the Japanese during the Japanese rule over Taiwan. After WWII, they kept parts of the bank vaults and storage facilities in tact to act as a historical display of what it once was. Most everything was original and was left where it originally was over 60 years ago. 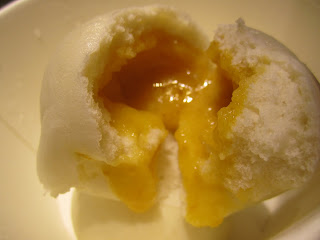 This is Hong Kong style egg custard buns (奶黃包). They're a dim sum dish that has semi-melted lava of creamy sweetened egg yolk in the middle of a pure white soft bun. My foodie friend is infatuated with this dish and rightfully so, because it's absolutely warm watering! She's been trying to find a suitable replacement for this special HK dish here in Taiwan. And we finally found it in two places none the less. Both in the Shin Kong Mitsukoshi mall near Taipei Main Station (新光三越).