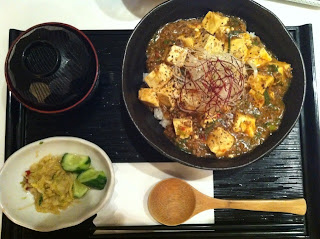 Yes, it's that time again. Farewell to another Shida 師大中文中心 student/friend. He'll be heading back to New Zealand in a week. So today, we all decided to gather at another small and quaint restaurant that Taipei has so many of. It's tucked away in a small alley in YongKang Jie 永康街 right behind the Shida campus. The restaurant only has about 8 tables, so the wait was 30 minutes. It would be best to have someone come early to make the walk-in reservations because phone-in reservations are not allowed. The outside wall is made of sandstone colored brick with a simple backlit sign that reads Rice Cafe. The interior design is very simple with one long wood bench along the back wall, sandstone colored wallpaper and gleaming white tables. I liked the blue swirl accented glass cups. The collective atmosphere kind of gives off a Japanese beach feeling. As a group, we ordered Katsu-donburi (deep fried pork cutlets over rice), Tempura-donburi, shabu shabu, Japanese style Mapu tofu donburi and Korean-Japanese Kimchi donburi. If you see a reoccurring theme of donburi, it's because Rice Cafe is known for it's great Donburi. It's also known for bringing in a more authentic Japanese cuisine to Taiwan. The restaurant Rakumenya Ramen (樂麵屋) next door is also run by the same owner and brings in it's own culinary following of authentic ramen lovers. 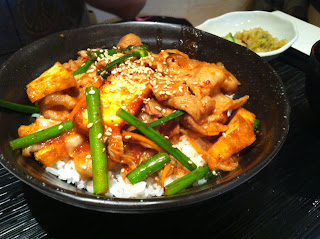 The Mapu tofu donburi was of my choosing. At first I dismissed the dish as a Chinese-Japanse fusion. But my knowledgable girlfriend corrected me saying that Japan does have it's own traditional version of Mapu tofu. The kimchi dish however I believe is a fusion recipe. The Mapu tofu donburi turned out spectacular! The rice base is a subtle sweet koshihikari rice, with a slightly spicy and tangy mapu tofu on top, topped off with a little saffron was absolutely the best dish on our table in my opinion. I sampled some of the other donburi dishes, and they just didn't compare to this unique flavor. I highly recommend trying this dish out. Or some of the other menu items that sound equally delicious, but more expensive, like the Chirashi bowl and steak donburi. Prices were quite reasonable for the quality, $180-$350. The donburi bowls also come with pickled sides and miso soup to add to the value. I really enjoyed my meal and would be willing to share this experience with others in the future. It is truly a rare gem of a restaurant in Taipei when it can offer value, authenticity, AND quality.