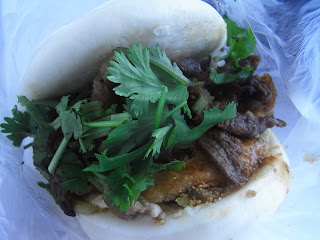 My girlfriend informed me of a lantern festival that was happening in LuGang. It's apparently this year's chosen city for the lantern festival and it has an old town, which I always find interesting. Our plan was to head out for one day and then head over to Hsinchu to visit my cousin which I haven't seen in a while. First off, we took the train and only had a small 7-11 breakfast. It took a good three hours. So when we arrived, I was starving. On the way to the festival, they had setup a rather large food market with temporary tents. This could have been LuGang's night market, but I can't tell the difference. Even some permanent night markets are still under tents. There were some unique foods there and some common staple foods. But I did see a guabao 掛包 (chinese hamburger?) vender and that's what I ended up desiring. Usually they use fatty pork but this vender used lamb. I love lamb, so i couldn't pass up this opportunity. It tastes awesome. Although I still think gaobao is better paired with fatty pork because the lamb makes it too lean. But it is definitely a unique take. Moving on, we headed over to where every else was going...the old street. Upon arrival, there were thousands of people, street venders, lanterns and street performances everywhere. It took forever to walk down the street or even take an unobstructed picture. Several of the buildings were over 100 years old. 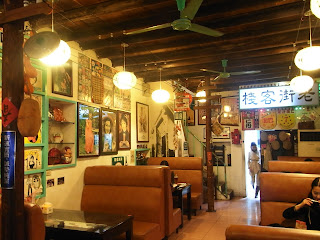 I always enjoy looking at old asian buildings. The wood braced roofs and the intricate stone carvings on the building corners make them so attractive. Looking further, you can see some of the japanese, chinese, western and taiwanese influences in the architecture. Sometimes renovated over the years and you can see a mix of cultures. We stopped by an old cafe that served Taiwanese and Japanese cuisine. It was decorated with advertisements and trinkets from the 20's to the 60's. It seems to be a popular theme here in Taiwan and I like it. It's like visiting a diner car back in the states, you know, like the one's converted from old pullman trains. 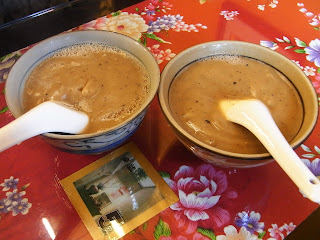 For dessert we also tried miancha 麵茶, which is an old porridge dish that used to be popular 30 years ago, but has slowly phased out of popularity. LuGang still carries on this dish for traditional purposed. According to my Aunt, the government at that time would give out rice and noodles for free and milk was expensive. So someone invented a way to grind these free ingredients into a porridge that was supposed to taste like milk. It doesn't. But it still tastes pretty good! I regret not buying a $100 NT bag of this to bring home. It's a nice place to revisit, during lantern festival or not. It's still a tourist attraction, so the businesses will still be open during the regular season. 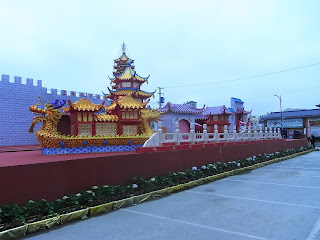