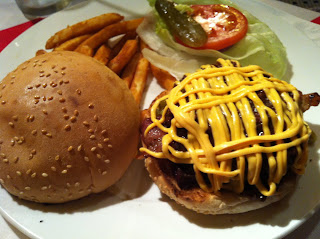 A while ago now, iBurger and another reader recommended that I try out Kitchen 66 near the Taipower MRT station. I'm always up for a try at some good burgers in Taiwan. As cliche as a westerner craving a burger is, a good meaty juicy burger is just what my stomach was craving this evening. So I took two of my usual culinary explorers with me to hit up with supposed great burger joint. Wandering down the alley, I see a neon sign that looks like the old Route 66 sign, but instead it says Kitchen 66. Walking inside, you are visually confronted with a TGIF looking interior with a black and white checkerboard floor. An old gas pump that looked like it was found in the middle of the New Mexico desert was next to the door. Random bits of old american signage and trinkets were hanging on the wall. And there were several cityscape pictures of New York and Chicago too. I ordered a spicy burger (i believe some jalapeno and Chipotle were involved) and some one else ordered a pizza. The burger turned out to be excellent! Big patties, juicy, cooked slightly under medium and a great spicy tangy sauce. I wish they asked how I wanted my burger cooked though, as i do like it a little more pink. The burger bun to meat ratio was good. However they toasted the bun on the outside not the inside. I don't really think there is an edible difference, but it's a new method I've never seen. Perhaps it's to keep the crisp from being "sogged" from the juices of the burger. The other burger was the bacon cheeseburger, with one lonely strip of bacon. How stingy of them! 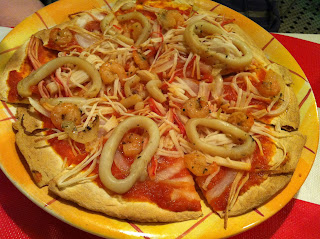 The fries were OK. I like the seasoned fries from 1885 better. The pizza on the other hand was a huge disappointment. It had the thinnest crust I have ever seen. I mean cheap cracker thin! Can you even call it a crust? Someone please teach the Taiwanese how to make a proper pizza crust. Why do the Taiwanese people like this brittle flavorless cracker crust that can barely hold the weight of it's cheap corner cutting ingredients on top (peas and string beans...really!?). Moving on, I also saw they had fish and chips. I'll have to try that next time as one of my new culinary hunts in Taiwan is to find a good fish and chips joint. I'm skeptical, because even in the States, it's hard to find a decent fish and chips place. For now, stick to their burgers and use the pizza as a frisbee. 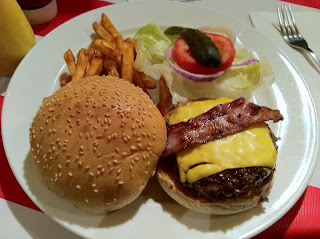