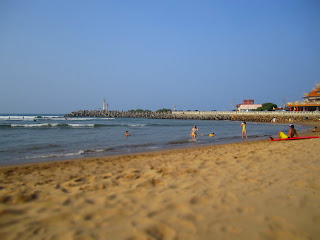 After watching a TV program, I decided I needed to explore Taiwan's beaches. The closest one that I found with good recommendations, was Fulong beach. Also since I still don't have a job, I have to keep this under a budget. So day trips only, nothing too fancy like "green island" or Kenting. Fulong beach as just popular enough and local enough to fit. It costs about $198 NT round trip from Taipei main station on the express train (reserved seating). You take the Eastern Yilan line to Fulong station. To make it cheaper, you can change it to first-come-first-serve seating, which means there's a chance you'll have to stand for the 1 hour 15 minute train ride. Or you can take the local train instead of the express and that'll take even longer (+30 minutes i think). Either way it's a difference of $30 NT, not much. Upon arrival, they have bike rentals at the Giant bike shop right next to the station exit. $100 per day. But I was here for the beach, not bike riding. However I did see many people riding bikes, but I'm not sure what there is to see except the scenery. 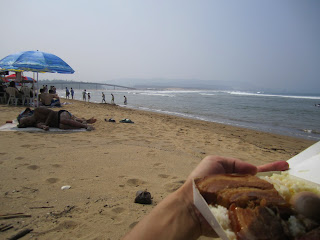 I arrived right before lunch, so under the recommendation of wikitravel, we bought a box lunch (bian dang, 便當). They range from $50-80 NT depending on which restaurant and what you want. I opted for the Kong Rou (空肉) which cost $70 NT. There are numerous box lunch places around, hard to miss. Heading to the beach, there seems to be two areas. The one on the left costs $100 NT entrance. You'll have to cross a bridge to get to the beach, but you won't cross the bridge until after you paid. Then there's the one further to the right. I didn't know where I was going, so I ended up at the beach to the right. This turned out to be fine. It wasn't crowded and it is free. There's surfboard rentals, although I didn't rent a surf board, so I don't know the cost or even where to rent it. Wikitravel said you should be able to rent one there. I'll have to find out next visit. I also saw kayak and jet-ski rentals too. Also, if you don't have a large beach umbrella to bring along, you can rent those too. It costs $200 per day for a small one that fits three people. The beach is a soft white sand and the shore isn't rocky. It has sand bars every 40 feet or so, so it's shallow. My only gripe was the debris. The beach has a lot of small garbage debris washed up. It's not that annoying to just avoid stepping into it. The wave that day were pretty good. Good for beginner surfing. About 4-5 foot swells and a it continued until about 3pm. 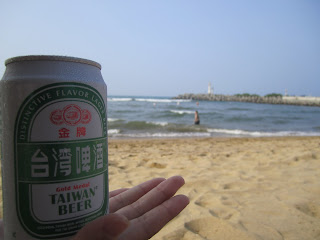 By 4 pm the waves were breaking late and the swell period longer and longer. I had a great time! This is my first experience exploring the eastern side of Taiwan as well as Taiwan's many beaches. It was very relaxing to just eat lunch on the beach, play in the water, drink beer and listen to the waves wash ashore with the sounds of children giggling in the background. I'll definitely have to revisit with some friends and continue exploring the eastern side. Taiwan, I'm loving it! 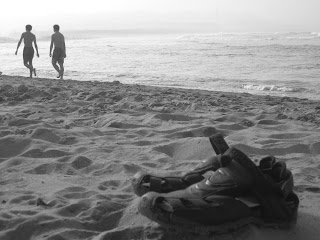