I often visit the Yonghe area because I have several friends that live there. However I always seem to come to the same dilemma. What is there to eat around here? There used to be a nice AYCE hot pot train restaurant next to the DingXi MRT station, but that has been replaced by a large stationary store and Thai Town. Besides thai food, cake shops and a few traditional fried rice/noodle places, there isn't much to offer. Until my girlfriend told me of a Dim Sum place very close to the station. She discovered it with some friends a few weeks back. It's called 大大茶樓. So made an afternoon of it and invited some friends over to join us. It's on the third floor of the building. Ironically, you need to use the elevator in the large stationary store I spoke about earlier. Note* Upon exiting, we discovered there is another private entrance next to the Starbucks. Anyways, upon entering the restaurant lobby, we were surprised by the design of the place. It was upscale and pretty. YongHe is sort of the ghetto of the Taipei area. It's not the cleanest or most well sorted part of Taipei. So it's a change to be in a relatively upscale restaurant in YongHe. My friend said she felt like she wasn't in YongHe anymore...and she lives in YongHe. The host (later we learned he was the general manager), greeted us and offered us seats and tea. All tables were full and we had to wait for about 10 minutes, so it seemed to be a popular place. After being seated we started ordering immediately. They push the food around on carts. I truly love this old style. It's slowly being fazed out as more and more Dim Sum restaurants are converting to ordering from a menu. But I love ordering my food seeing it. Not because there's a language barrier, but with food, a picture says a thousand words! Better yet when it's actually in front of you. Moving on to the food. The restaurant's selection seems to cover the most common of dim sum offerings that I'm used to. They are missing a few, but from what was available, it wasn't bad. They still stick a few Taiwanese menu items in there, but I won't devalue them for that. In the States, you'll still find egg rolls and fortune cookies on the menu at Dim Sum. It was a delightful experience and so far one of the best, if not the best, Dim Sum places i've been to in Taiwan. 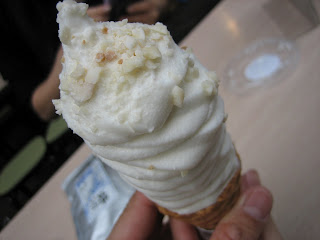 The price tag ended up being about $350 a person. Not too shabby. I wouldn't mind coming back here another fine weekend afternoon. Afterwards, a few of us headed over to the LeHua 樂華 night market (still partially open during the day) for some dessert at Yu's Almond Tofu. We tried something new. Their almond soft serve on a cone with almond crumbles. Deliciously awesome as usual. Highly recommended! And I end it here, so have a good weekend everyone!