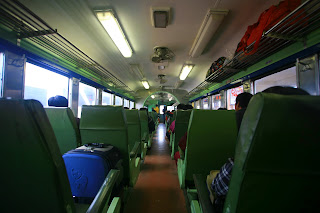 Today, we wanted to head over to the Ruisui hot springs area. So we hopped on to the local train. Little did we know the local train was a historic relic. It seems to me the train harked back to the 1970's era aluminum sided passenger trains. Inside, they had old squeaky iron seats with some really old oscillating fans on the ceiling. Along with the pea green lacquer and the finely detailed tin wallpaper, I felt like it was a museum. It was a rather cool and unexpected experience though. I appreciated it. Apparently several other people did too as I wasn't the only one taking pictures. There was even a man at the front of the train recording a video through the front window. After a while we also moved up to the front to get the full view going in to and coming out of dark tunnels. It's such an old train, the engineer's (driver's) cabin is right next to the front seats. So you can see him flipping and turning levers while the train huffs along the rails. Unfortunately halfway through the trip, the train broke down. From what I could understand in Chinese, the train's armature broke. It would have taken another hour and a half before they could get it running again. So they called a passing by express train to stop and pick us up. With the delay and the time saved by the express train, we miraculously ended up at our destination on-time as scheduled. Once we got to Ruisui, we took a taxi over to the hot springs which is a few kilometers down the road. 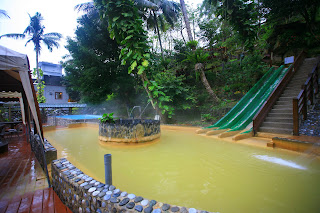 The Ruisui hot springs are known for their muddy nutrient rich waters, as opposed to the usual clear hot spring water I've tried before. We ended up at a small hot spring. They only had three pools. One was cold, one was luke warm but very shallow and the large one which was around 41 degrees celsius. It cost us $150 NT for entry. Cheap! It may have just been the springs that we chose, but it seemed to me that most of the springs were small. I was expecting a larger park sized hot spring with multiple pools of varying temperatures. It may have been the light rain too, but most places were very empty. Although the hot springs were soothing, I think i'd prefer a larger more expensive park sized hot springs location with restaurants, snack bars, massage rooms, saunas. Thus ends my Hualian weekend, and there's still much to plan and see for next time. Back to Taipei!

花蓮瑞穗東川秀岡溫泉
a modern japanese styled one, seemed cleaner but we didn't choose it.
Posted by B Huang at 11:21 PM