Hooray, it's make your own pottery day. I've been planning this one for a while. I've been wanted to bring some of my friends back to Shu's pottery to attend another one of their pottery classes. The first time I went, it was with my Chinese class at Shida. It was the end of the semester field trip and it was a blast. However I wanted another hand at this pottery wheel. It's A LOT harder than the instructors make it out to be. But in the end, everyone asks for help from the instructor. So some people's pottery end up being made by the instructor entirely or at least partially. That's ok, because the fun part is messing up the first few tries yourself. Shu's pottery also has a wonderfully modern and large storefront that sells unique and sometimes very expensive porcelain gifts. After washing off, we headed out for some lunch in the old town of Yingge, which isn't far. Shu's pottery is pretty much in the old town, so it's convenient. 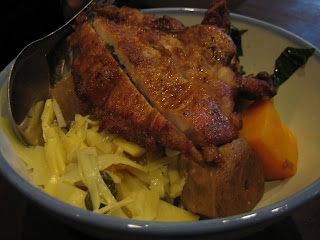 First restaurant we came across has a line forming out front. So we understood it as a clue that this place had something special to offer. After waiting for about 15 minutes and goofing off on the rickshaw in front of the store, we headed in to our seats. It's a small restaurant and you'll most likely have to share your table with others. But the interior design was cool. It resembles an old Chinese shanty town with an old telephone pole, old 40's era Chinese movie posters, antique nick-nacks, wood shingles and discolored lamps. We asked what the speciality was and the cashier said, fried pork/chicken steak over rice with vegetables and tofu. So thats exactly what we ended up ordering. It's not a fancy dish by any means, just a local blue collar worker's meal that this place has done right. It's simplistically delicious and wish all 便當 (bento) tasted this good. I usually find typical 便當 oily, but this wasn't. If your in the neighborhood checking out the pottery (or making pottery), I'd definitely drop by this place for some down to earth, simple and cheap Taiwanese cuisine. 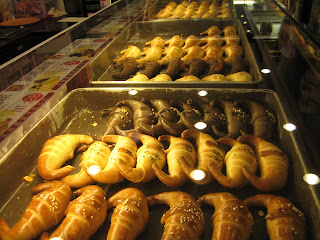 It's called 厚道飲食店 (no english name), look for the bicycle rickshaw in the front.Afterwards, I bought some Taiwanese ox horn croissants. There are several bakeries around here that sell it and it just smells so good to pass up. Some even offer ice cream on top. If you see some of these around, buy one. It's cheap and tastes awesome. It's not light and fluffy like a french croissant, but thicker and more doughy like a (American) southern butter biscuit.