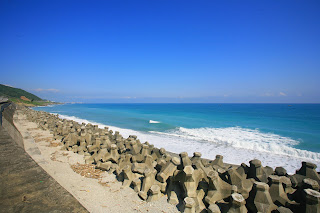 On our second day in Hualian, we decided to take it much easier. No long hikes, confusing buses or waiting in line. After a leisurely breakfast at our hotel we headed to the train station. Directly in front and across the street from the train station is a scooter rental place. It's called 小馬 or Pony Rentals. They're special because it's one of the few places that will rent a scooter to foreigners. Bring your passport and ID and International driver's license if you have one. It ended up being $500 NT for one day. However I find that Taiwan doesn't mean 24 hours when they say 1 day. They mean you have to return it by end of their business day. Which in this situation was 8pm. Since I usually ride a 600cc motorcycle with a different seating position, it took a few minutes to get used to riding a 125cc scooter. Shortly after that, we headed out of town to highway 11. It only took about 15 minutes. It probably would have been shorter if I was more used to riding in Taiwanese traffic and knew where I was going. Once on highway 11, it was a very straight and smooth ride with limited traffic. Riding down with the sea on the left and the greenery on the right was a rare experience. I think riding a scooter is the best, so you can really take in the fresh sea air and the smells and sounds of the open road. After a while we decided to take a bathroom break at a rest stop. 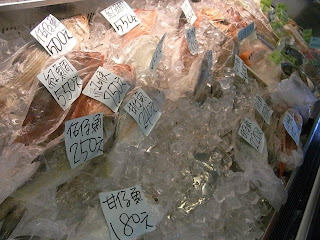 The rest stops along the shore are very different than the ones i'm used to in the States. The ones in the States are so dirty, dark and general lack of anything nice. These rest stops are more like visitor centers. With a beautiful courtyard, vending machines, clean bathrooms and a very helpful staff. The one we went to had several large verandas for picnicking under shade. They also had a room with a miniature road running around the circumference of the room. Along this miniature roadside were the miniaturized version of major attractions along the way. It was a representative of Highway 11. Each miniature stop had pamphlets, pictures and brief descriptions of the destination (in Chinese, English and Japanese). I was so surprised! This is such an amazing over-the-top effort by the Taiwan Tourism Bureau. 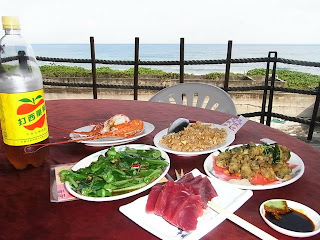 For lunch, we asked the helpful staff for some pointers and found a local seafood restaurant just down the road called 055. After heading in, we picked a nice table outside on the patio and picked some fresh (some live) seafood from the tank at the front. The meal turned out to cost around $800 for two people. But that's really good for some fresh seafood, sushi and even a small lobster. We thoroughly enjoyed the view and the food. After lunch, we headed further down HIghway 11. However we didn't have enough time to make it to where we wanted to go. We turned around and headed back to town. All in all, Highway 11 doesn't have much to offer other than some nice visitor centers and beautiful vast aqua colored seas and a large water park. Next time, I'll have to better plan a definitive destination like the water park or 055. I heard Shi Ti Harbor was a great place to stop by along Hwy 11. There are also some natural caves around the area that was open for tours. Next time.