I'm so fat my belt broke! 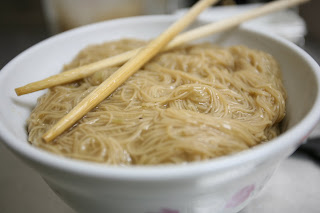 Today is the first time I cooked at home. Well, not exactly cooked, just a fancier version of instant noodles. I cooked some instant Oyster noodles (蚵仔面线) minus the oysters. Boil some water, add dry noodles and seasoning, then mix some corn starch in a seperate bowl of cold water. Then combine. See..fancy instant noodles :)

Anyways, a few hours later my belt busted. Was it the fancy instant noodles or because it was made in china? Yes, thats right, it's not my belly's fault and I'm not fat! I tried going to the neighborhood tailer to see if he can fix it. No dice. So being Friday and all, I decided to head back to ShihLin night market for a new belt. But first, a haircut.

I've been procrastinating on cutting my hair because of the language barrier. Now or never right? Well after some very bad chinese, i got it cut. Not the style I was looking for, but I think the hairstylist gave up and just did her thing. Umm...what did you do to my hair!? haha just kidding. It took me 30 minutes in front of a mirror to get used to it. 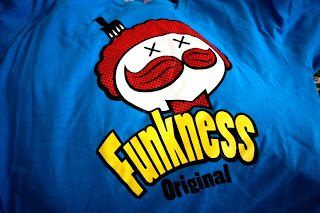 So back to the ShihLin night market and my search for a new belt. I finally found one I liked, and bargained it down from $1080 to $600. Later I learned that i probably could have bargained down to $300. oh well, $10 to help the Taiwan economy. Continuing with some window shopping, I discovered there are a lot of T-shirt stores. They have some pretty cool T-shirts to offer. Mostly english gibberish with a picture of an anonymous hip-hop looking dude posing like a ganster. I ended up purchasing a turqoise Pringles mockery for $7.50.

After an hour or two of shopping, I decided to head back to the MRT station. On the way back, I paid closer attention to the food they were selling, well.. because I was hungry. With all the awesome food Taiwan has to offer, I'm always hungry! I noticed a small japanese grandma selling Okonomiyaki from a stand. Okonomiyaki is a japanese omlette or pancake containing various ingredients. It's mainly asociated with the Hiroshima region of Japan. I've got to try this next visit. Walking on, I also noticed a stand selling fresh squeezed passion fruit juice (百香果). One of my favorite fruits. I love nibbling on the little seeds floating in the drink like pearls in milk tea. So I purchased a big cup for $40 TWD and promptly headed home before my eyes spy more food to make me fat. There really is still so many food options yet to be discovered. And you can always look forward to be blogging about it.
Posted by B Huang at 11:46 PM