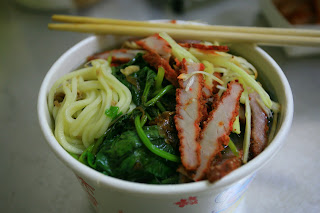 I had this for lunch. I decided to stop by a local shop for lunch. Of course, again I needed their assistance as I couldn't read anything. I was fortunate enough, that they displayed all their meats in front. So I just picked the meat and they asked be if i wanted rice or noodles and if I wanted any vegetables. I took it home and combined it into a bowl. If anyone could help me name what I ate? LOL. I think it's Char Siu Ròu Mian(叉烧肉面) [Edit: It's Char Siu Mian]. I really do like the taiwanese style Char Siu Niu Rou. The outside is crispier than the usual chinese version I grew up with from Chicago's Chinatown. 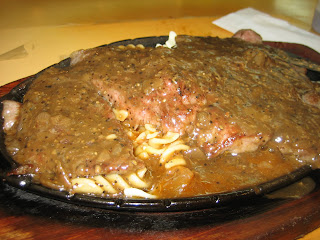 Tonight, for dinner I went back to Shilin night market. I had a craving for red meat and I remember the skillet beefsteak stands they had there. Of course again, I can't read chinese. So I just told them to give me beefsteak (牛排). Of course they asked me which kind or flavor? ummm...I speaka no chinese. I just told them to give me whatever. 2 minutes later they gave me a sizzling skillet of beefsteak topped with egg and pasta. Well the pasta and egg is underneath the steak if your looking at the photo. But damn, the plate was SIZZLING! I had to use a napkin curtain to stop it from burning my forearm. It continued to sizzle while I took the picture and about 3 minutes afterwards. Hot and Yummy! 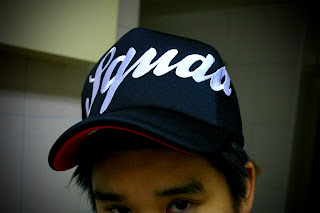 Afterwards I went to the outside section of the night market to shop for a mesh hat. Preferable a Squad hat. Apparently it's a popular brand around here. The venders told me I would have better luck at Ximending, but I did find one shop that sold it. Re:Armed. It was $980 NT or about $30. Expensive...well before negotiation. I also chatted it up with the store employee for 30 minutes. He apparently works hard but only gets 2 days of vacation a month and they cannot be on consecutive days. Aven also needs to ride 30 minutes to work from Taoyuan. Thats a commute.

Finally, walking back to the MRT station. I noticed two unique food stands. First one was a burrito stand. Yes, burritos! Probably with a Taipei twist, but i'll have to find out next time. Second was, what i assume to be, a thai BBQ chicken wrapped in a roti. When i get to try it out, I'll certaily take some photos to share in the delicious bounty. See everyone next time!
Posted by B Huang at 10:34 PM