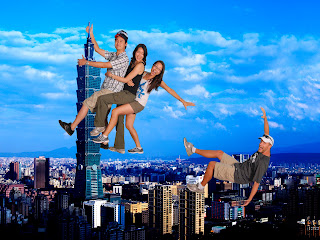 I spent the day with Lucy, HaTwin and Kurt. We visited the Chiang Kai-shek memorial and the museum along with it. There was much to see in the museum, including a creepy wax figure of him, his Cadillac limo, several pictures and books and uniforms. Next we took the MRT to Sun Yat-sen memorial. Despite being the "Father of Taiwan", it doesn't look as nice as Chiang Kai-shek's memorial. By this time, it was getting late so we walked over to the 101 and decided to eat in the basement level. The funniest moment was when HaTwin carved Lucy's face into her Yakult/Passion fruit gelato. You must look through the photos here. After lunch, we headed up to the 101 viewing balcony. I must say, viewing from inside through the large windows is much better than outside. The vertical metal barriers and protruding guard rails really block the view outside. Being the funny group we were, we all combined our money to be Enlarged. Think Honey I Shrunk the Kids. We then went outside and hung off the 101 building like giant King Kong gorillas. Kurt fell. Butterfingers! 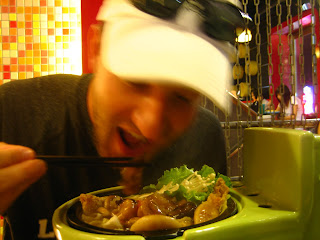 When we were shrunk back to our original sizes, we headed over to the Ximending night market for dinner at the famous Modern Toilet. Delicious bubbling curry in a toilet shaped bowl, drinks in a urinal cup and choco-poop desert in a squat hole. What more needs to be said? MMmmmmmmm! In a restaurant like this, dirty toilet jokes were inevitable. It was a FUN day! 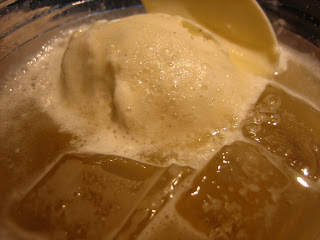 Oh and I almost forgot. We had Taipei 101 Beer Floats too. Yes, it's vanilla ice cream floating in Taiwan beer. It's like a root beer float, but with real beer. Kurt believes it's going to be the next food evolution. Just you watch, beer floats are going to spread world-wide and be a Taiwan originated phenomenon. Haha. It was kind of disgusting.
Posted by B Huang at 9:39 PM