Today, I got a chance to go to my first concert in Taiwan. Also it's been a very long time since I've been to a concert. I mean, a REAL concert, not a rock band. Out of spontaneity during a walk with friends around Ximending, we heard a single street performer playing the Erhu. From there, we decided to search for a Erhu concert we could attend. I googled it, first result, the following weekend. So easy! So as the days grew closer, we tried to decipher the chinese characters so we could order our tickets online. I finally found out that you can purchase tickets through 7-11's iBon service. Pretty much any ticket you want for anything in Taipei can be purchased from 7-11, 24-hours a day, at any of the thousands of locations. Heck you can almost purchase anything short of a house/vehicle at 7-11. So convienant and no surcharge. Why isn't USA this efficient? 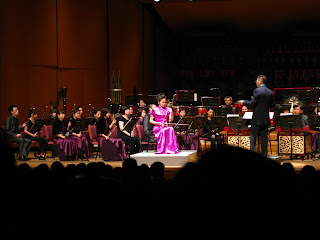 The concert was sublime. The sound was amazing. The music and instrument is so uniquely chinese. You could really hear the emotions and expressions through the Erhu. Having an orchestra of about 50 erhu's just amplifies that. One of my favorites was Feng Tang playing Love from Suite Grand Courtyard of Qiao Family. The Great Wall Capriccio and Erhu Rhapsody were also great. Mom and Dad, maybe you heard of these songs? I wish there was a way to post a video or better pictures, but they did not allow cameras. So these were sneaked in from a small camera. We were still caught and promptly given the X symbol made by the usher's arms. LOL. Oh and the seats were great and so cheap too ($300 NTD). The Ximen MRT station exit 5 puts you right in front of the building. The whole evening was just awesome! If you ever get a chance to listen to an Erhu orchestra, don't pass it up. Better yet, come and experience it here in Taiwan. :) 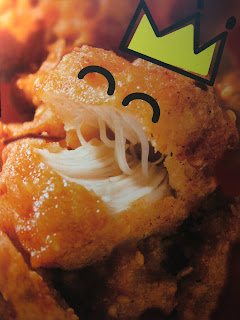 Oh and after the erhu concert we were still hungry. So being that we were already at Ximending, we walked around and shared food from various food stalls. We even went to my favorite tsua bing (剉冰) dessert restaurant. The one with everyone's signature on the wall. Mine from 2006 and 2008 should be there somewhere. I leave you tonight with a picture of happy chicken monster from a popcorn chicken place right at the entrance of the Ximending night market.
Posted by B Huang at 11:32 PM