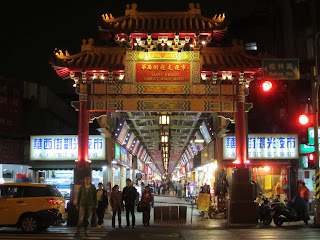 So today I had a pretty lazy day. Sat around, studied a little. played Forza 3 on my Xbox and got some errands done. Come dinner, Yuki was freed up, so we met up and headed over to HuaXi. It's been a night market that neither of us has visited. Since the normal night markets were getting boring, we need to start exploring some of the lesser frequented night markets. HuaXi's nickname is Snake Alley. It used to be a legalized red district, but has long been converted to a two-block long night market in the Wanhua district, the oldest district of Taipei, Taiwan. It is noted for its restaurants which serve bizarre "delicacies" including snake blood and meat, turtle blood and meat and deer penis wine. It was a unique night market to say the least. Not too much traffic and definitely sets itself apart from the normal night market food. It's still a rather unsavory place to be, so be careful with cleanliness and criminal activities. I'll visit back again, sooner or later. I have to try some of that snake blood and meat!

Email ThisBlogThis!Share to TwitterShare to FacebookShare to Pinterest
Labels: Huaxi