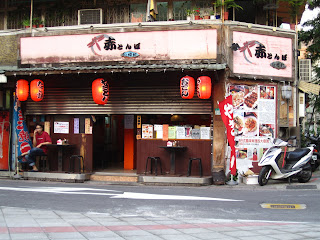 Today was air raid day in Taiwan. I'm not entirely sure the reason why. But the way my teacher explains it, is to protect citizens during a bombing run if there happens to be a war between Taiwan and China. She says they do this every year. Sometimes twice a year if the relationship with China is bad. This is the first time in 2 years that they have done this, so I guess the relationship is good. So between 2-2:30pm no one is allowed in the streets. No pedestrians, no cars, no motorcycles. Just police like a city declared under marshall law. So Taipei becomes eerily like a ghost town. It wasn't as dramatic as I thought it'd be, because there are still a few people still on the sidewalks walking. But essentially a very quiet and empty Taipei when it's normally very busy and crowded. Moving on...writing yesterday's blog entry really got me craving for some Yakisoba. So after class, I set out to find a japanese store that sells Yakisoba. 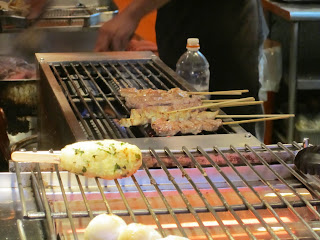 I remember it so fondly from my childhood when my japanese grandmother made it. It's so tasty and it really stands out as a special dish for me. She cooked it for me when I was living in Taipei (along time ago). So it seemed fitting to enjoy some Yakisoba again in Taipei. We found it in a small restaurant that I dined at before with a friend from Boston. It's called 紅蜻蜓食事處 (no english name that I saw). They're specialty is Yakitori and Kushiyaki. Having tried it before I can definitely recommend this place. But prepare to bring some extra cash, it's not that cheap. It won't break the bank, but is beyond my student budget for now. It's about $100 NT a plate and you'll need a few plates per person. But I was there for the Yakisoba. It turned out to be tasty too, despite not being grilled. However the serving portion was small and there was exactly two pieces of beef. They have the flavor down, but please give me more! Well, I guess it's a Yakitori bar, so I guess your supposed to order several plates at once in stead of a single plate meal. So I guess that's my fault. I shall return with more money and choose the delicious meat skewers next time instead.