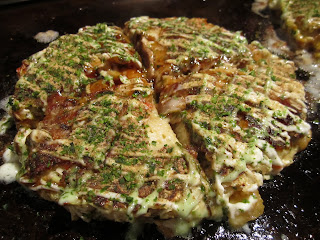 Yuki and I went exploring more around YongKang Jie after class. We originally wanted to go to a newly opened chinese restaurant that we saw the other day. But it was closed. But when one door closes another one opens. So we decided to go to an Okonomiyaki restaurant (Tenya, TEN屋) we keep passing and never think twice about. We were surprised when each table was a booth and a hot plate grill in the center of the table. It was a DIY okonomiyaki grill. We quickly ordered a Osaka version and a Hiroshima version. Of course We had no idea on how to make it, so they happily taught us by grilling it for us. Of course it's a little complicated and I frankly don't remember. But what I do remember was that it tasted awesome! Fresh, hot and tasty right in front of you. It does take some time to cook though, like 15-20 minutes. 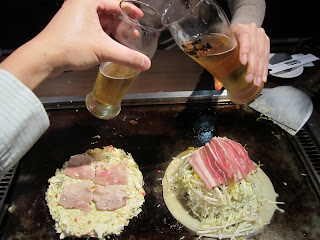 So that really builds up your hunger. They also have a beer menu and grilled skewers of meat you can order too. Okonomiyaki orders range from $230-$290. The booths offer privacy and it's a relatively quite place even after it started to fill up. This definitely warrants a revisit with friends in tow and orders of beer. Cheers! It's 106台北市大安區永康街12號之3 (http://www.tenya.com.tw) 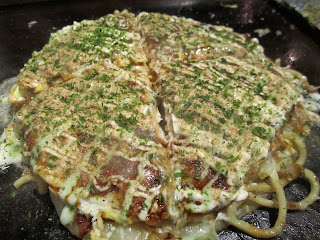