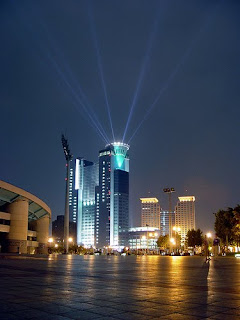 Today, Yuki introduced me to Banqiao. It's a newly developing city just outside of Taipei city, in New Taipei City. We visited two large malls there. The FE21 mall and the MRT station Global mall. The FE21 mall is like any other mall in Taipei, but Yuki and I agree it was more comfortable. Possible due to less traffic and feeling of a slower pace. It doesn't feel as busy and rushed as the malls in Taipei. It's possible the racks and walkways were wider. The FE21 is still a very upscale mall. Moving on to the Global mall, It's attached to the Banqiao MRT station, which makes it very convenient to get to. It's smaller, will only two floors and basement with mostly food. But the wooden desk atrium full of cafe's and restaurants was what made it stand out in my mind. It has large skywindows to allow as much sunlight to enter the long atrium. In addition the large planted trees, wooden deck, patio furniture and a neat line of cafes and restaurants give off a very relaxed, outdoor feeling. Afterwards, we decided to stick around for the Banqiao night market. Don't be fooled by the distance, thinking you have to take the next MRT stop to get closer. It's close enough to just walk there. Although I didn't find anything particularly special to this night market, it was good to find another large night market that I haven't explored yet. Overall, I get a much more different, relaxed vibe from this developing city. I'll definitely consider coming back. Although it's so close to Taipei and it's still a city, I got the same feeling as when I first arrived in Taipei. On top of that, it only costs me an MRT fare to get here. A whole new city for me to explore. The Taiwan discovery never stops. *Photo taken from "Taiwan High Rises" photo group.