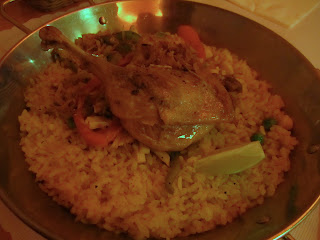 Yuki and I decided to go back to Gongguan today to find that hole in the wall pizza place we saw a while back. It smelled really aromatic. It's tucked away in a tiny alley way and the pizza's were thin crust cooked in a porcelain oven. But walking back and forth from alley way to alley way, we were unable to find it again. Disappointed, we did the best thing you can do in this situation in Taiwan, EXPLORE! That we did. So we discovered a spanish restaurant. Walking in we were greeted by a very friendly host, possible the owner. He said they've been open for about 1.5 years. He noticed I wasn't a native speaker so he asked where I was from. So he was happy to say that he was a fellow Californian too (after moving from NY). 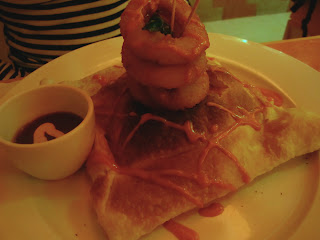 After being seated and ordering, we noticed that he goes around to other tables to strike conversations. Thats some hard work and dedication to maintain that with all his customers. He recommended the empanadas. However since Yuki ordered the empanada, I had the hard decision between the 18 spice pork ribs or the 8 varieties of paellas. I chose a crispy skin duck confit paella. The paella turned out to be only OK. I believe it's more of a taiwanese style version. However the duck confit was better. It's still missing the thyme and fat flavor that most confits have. So although it tasted good, it tasted "healthier" than normal duck confit. If you get what i mean. I think next time i'll go for the 18 spice pork ribs. Yuki's empanada was a different story. It was delicious! The sauce so savory, the crust so flaky and the meat inside so tender and tasty! Average price is $180-$250 per dish. Drinks and dessert are separate and I don't think the waitress mentioned a set menu. But it's a pretty good and fancy dinner for a student budget if you don't order any extras. This place really has a lot of potential and I'd definitely want to revisit in the future to try out their other delicacies. Sorry for the poor photos, the place is also lit with a very orangey lighting, completely confusing my camera's white balance.