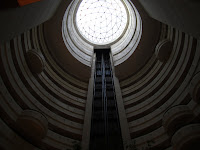 Slept in this morning because…I can. It's nice to have the opportunity to sleep in once in a while, especially on vacation. So Yuki and I barely made the complimentary breakfast at the hotel. If your ever at the Shangri-la, the breakfast area is very nice. The hotel has a cylindrical shape, so the Horizon club dining area is suspended in the middle (not on the first floor). After satisfying our stomachs with made-to-order omlettes and waffles, we quickly headed over to the National Museum of Taiwan Literature. It's a beautiful turn of the century Japanese build building. 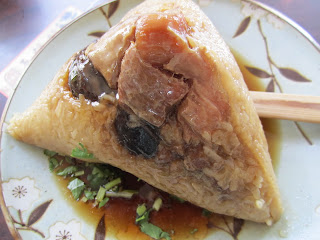 According to what i see in the historical pictures and the chinese that I can understand, it was originally a military command post by the Chinese and Japanese. It wasn't until the last 20 years that it was converted into a literature museum and library. The entrance fee is free. After a short tour, we were getting a little hungry as it was already past noon. Well maybe only I was hungry. Gift of a fast metabolism. So we then headed to a famous Tainan Zhongzi restaurant. The Zhongzi （粽子） was must softer, sweeter and considerable larger. They do have a normal size, but the large one (at $150NT) was twice the size. 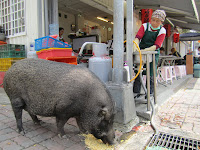 I'll remember to share this one next time. Afterwards, we decided to walk off some of the lunch. Wandering into a old alley way, we bumped into a black pig on our way to Chikan Towers (赤崁樓 Chìkàn Lóu). Afterwards we stopped by the Confucious temple (孔廟) for a second time on the way to west gate(大南門). The west gate was simple and small. Obviously the walls connecting it are long gone. So the only thing left is the great brick corner building with a big iron double door in the middle. Moving on, Yuki read about a famous mochi establishment in Tainan. It's not too far from the city center so look it up and stop by if happen to be in Tainan. It is actually a strawberry （草每） wrapped in red bean （紅豆） wrapped in mochi. 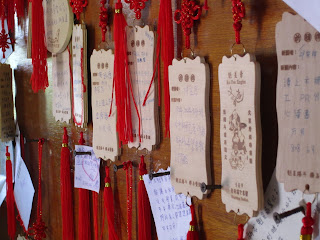 That about did it for our list of site we wanted to see in Tainan. So we had to kill some time. So we found an almond tofu shop nearby for some time to get off our feet. Almond tofu （杏仁豆腐） is also kind of famous in Tainan. I don't think the one we visited has any notoriety, but the shop owner was definitely friendly and talkative. I find most faces in Tainan to more friendly and talkative compared to the bussle of Taipei. After some slurping up the last of my sweet almond tofu, we headed to a small "old Street" and found a Tainan noodles place (過燒意麵). Yi Mian is probably the most famous food related to Tainan. We were told to not miss this while we were here. As with most food here, it was a sweet. But these noodles had an additional almost cinnamon taste to it. It can be served as a soup or on a plate. 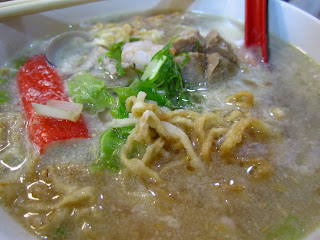 Traditionally it should have eel in it too (according to my MTC teacher whom is originally from Tainan). Last stop..Ba wan aka meat circle (肉圓). Using Yuki's Iphone, we quickly found a famous Tainan Ba Wan restaurant for dinner part 2 I guess. Well we shared the Yi Mian noodles, so don't think i'm stuffing myself :(. Entering the place we were ushered to the back where we were seated by a happy "hefty" guy and ordered one Ba Wan. Wow! It was soo good. nian-nian 黏黏 (I don't think there's an accurate English word, maybe sticky), warm, meaty and sweet! It was so good, we had to request a second order. He happily obliged. But now our Tainan trip has come to a conclusion and it's now time to hop aboard the train back to Taipei. 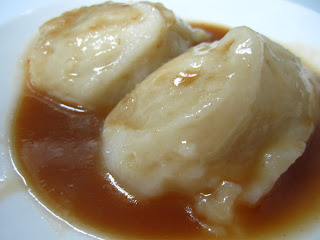 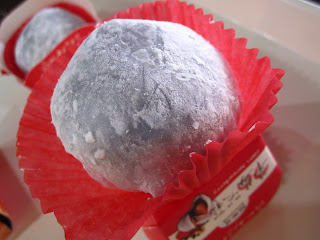 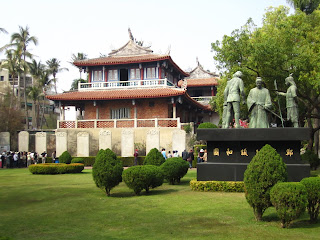