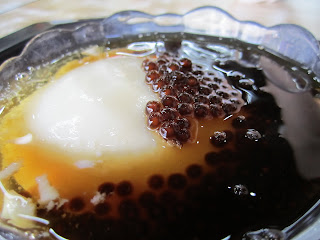 Rise and shine! Early wake for an early start on my Tainan trip. First off, I wanted to surprise Yuki with a lox bagel from New York Bagel. After getting ready and doing the final packing, I head out to the Renai Rd. 24 hour New York Bagel. Just my luck, it's closed. It's open 24 hours a day, but for some reason it's closed for maintenance, TODAY! Who could have predicted that. So I headed to the Taipei Main Station location, which happens to also be our meeting point. This NY Bagel location is not 24 hours, but they do open at 8:00 AM and our train leaves at 8:19 AM. Once opened, I put my order in, but they say they need 20 minutes to prepare the kitchen. What!? NY Bagel, you FAIL me! 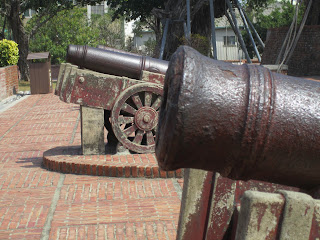 So Yuki and I just bought some 7-11 snacks for the train ride. We took the Taiwan High Speed Rail. Expensive but it gets us there in 1 hour 40 minutes rather than 4 hours with the normal train. The high speed is also much more comfortable. Once in Tainan, we headed straight to our hotel, the Shangri-La Far Eastern Hotel, to drop off our baggage as it was too early for check-in. Next we called a taxi over to the Anping Fort. Once there, we had a little snack. Dou Hua (豆花). It's a chinese sweet tofu soup that can be served cold or hot as well as include other ingredients like pearls (aka bobba) or red bean. Dou Hua is a great snack, a little sweet, refreshing and healthy. 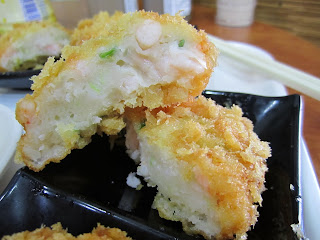 Moving on to the Anping Fort. It's an old Fort made during the dutch rule in the early 1600's. It was here that the battle between the chinese and the dutch ended the 38 year Dutch rule over Formosa (Taiwan). There's a tower in the middle of the fort with great views over Tainan. While browsing through the museum, we met up with Hanya. Such small world (island) that I get to meet up with my friend one last time before she leaves back to Germany. So cool. Afterwards, it was time for dinner. Yuki heard of a famous shrimp roll place in Anping. According to Yuki, the english name is Chou's shrimp rolls (www.chous.com.tw). We ordered some shrimp rolls (周氏蝦捲), some fried seafood cakes (黃金海鮮派) and some noodles. The seafood cake and shrimp rolls were awesome! Crispy and delicious, bursting with seafood flavor! 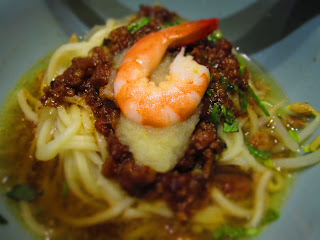 They have three locations in Tainan and several in Kaohsiung too. I recommend this place if your in Tainan. Afterwards, it was time to check in and unwind a little in our hotel room. We reserved the Horizon Deluxe King suite. We got it for a very good deal. It had a very spacious bedroom, family room and bathroom (two sinks). It's also part of the Horizon club, so we get a higher floor suite, with a great view and a horizon member only lounge area with complimentary drinks(alcoholic) and snacks. There is also a nice restaurant on the top floor with stunning views of Tainan, but we didn't have time to make it up there this trip :(. Next time. The service was excellent. They wait on you hand and food. The moment you step out of the elevator there's someone there to help you with anything. But that's how a 5 star hotel should be I guess. If I can afford it next time, i'd definitely return. After unwinding for about 2 hours, haha, we headed out to the original Du Xiao Yue (度小月) location. There is one in Taipei, but we decided to try out the original. I did not know it originated in Tainan. Du Xiao Yue has been around since the late 1800's, making it one of the oldest eateries in Taiwan. They're famous for their Dan Zai noodles. My two favorite dishes there are the Dan Zai noodles and their deep fried oysters. If your in Tainan or Taipei, you need to try out their noodles. After taking a snapshot of the cook at the traditional stove like most tourists do :), Yuki and I headed over the Confucius Temple (kong miao, 孔廟). 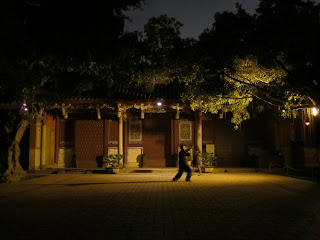 On the way over, we stumbled upon a famous "snack on a stick" snack stand. They serve vegetables, fish dumplings and various other articles of food stewed in a thin soy soup, stuck on a stick and served hot. Most 7-11's have this now, but this little shop has been doing it for quiet some time. It's is also very very cheap. It costs only $2 NT per stick. So you can have a little nibble or an all out feast if you want. We ended up at the Confucius Temple late, past closing hours. But entry is all free and open to the public 24 hours a day. The only thing closed was the shrine house in the middle of the complex. That must be paid ($50NT). The Confucius Temple is a very peaceful and serene place. Even at night you can see couples taking a stroll and other practicing Tai Chi. We were getting tired and I got sunburnt and the evening in Tainan were cold, so we decided to buy some hot desserts and bring it back to our room. Back in the hotel room, we turned on the TV, started the hot tub and unwound from the day. Ahhhh relaxing… 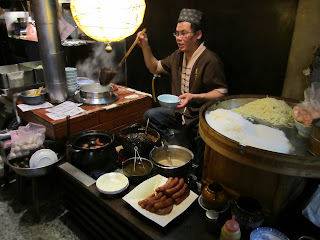 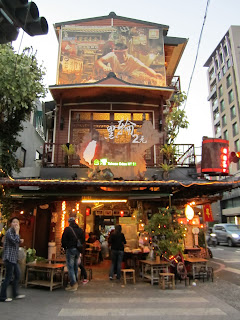 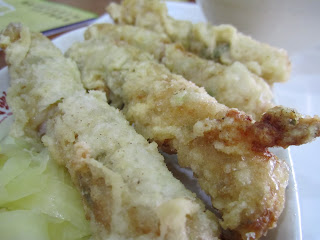